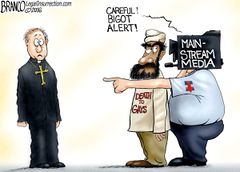 Quick, name a few "Christian Terrorists". If you try, you'll probably be wrong. Over the years, I've asked and researched, and never found one. Not that some weren't Christians, but I haven't found one that screamed, "God is love", as they blew themselves up, or scant few that committed crimes because the Bible told them drive a truck over people, or to kill as many Mulsims as they could. Can you imagine Christian extremists (like the Amish), riding their buggy bomb into building? It just doesn't happen. That's not to claim that everyone who is a christian is a saint, it's just called perspective.

A few days ago, a black Sudanese immigrant (Emanuel Kidega Samson) murdered one person at the Burnette Chapel Church of Christ in Antioch, Tennessee -- and was shooting indiscriminately and wounded six others. He left a note saying this was retaliation for the Charleston Church Shooting (Dylan Roof). Fortunately he was thwarted by a Caleb Engle, who after wrestling the gun away, used his own gun to hold the suspect until the Police arrived.

A friend complained, "why the focus (by the President) on NFL protests, when there was real news to focus in like Korea or Puerto Rico?"

My answer was because the media picks what's newsworthy, and the left-leaning media felt they could skewer the President more with the NFL story, than stories about how a black racist shot up a white church, and was thwarted by a civilian with a gun.

For days, the media snubbed the shooter story, until enough right wing outlets showed the hypocrisy, and got them to reluctantly cover it (usually to spin some weird angle on it, and gloss over the material points). The media far preferred to focus on NFL protests, and trying to invent Puerto Rico is Trump's Katrina meme (despite a far better response than a few of Obama's natural disasters that the media ignored).

Another friend whined that in pointing that out, I left out that the shooter may have been a Christian, as if that was at all relevant to any point.

I responded as I have many before, "Do you have any links that show he did this for Christianity and religious motivations?"

My point was just that the media is biased in what they treat as newsworthy, and what they suppress because it looks bad on their agendas. They invent news by what they choose to sensationalize and ignore, and it's good to be skeptical of their agendas.