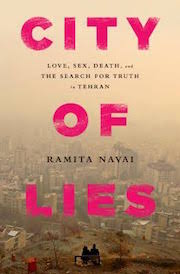 I read this book called “City of Lies” by Ramita Navai.

The first thing to know is Ramita is sort of a Social Justice Warrior, traveling the world, giving voice to the underclasses in the world (that seems to be her calling, and what she wants to do). And that’s exactly what this book feels like.

It isn’t a very balanced set of stories, but I hope balance wasn’t her intent. It was more a Westerner, who is not a fan of the religious, traditions, or in some ways, even the culture, proselytizing on how unfair and unjust their world is (through a western liberals eye’s).

It’s a fascinating, well paced glimpses, with stories that are worth hearing (or can skip to the next one), but you feel like you have a filter on the lens you’re seeing the world through. It feels like “This American Life” on NPR (fascinating human interest stories), but in Tehran, and focusing on mostly the folks that are poorer, or doing things that risk their lives or consequences — and with many of their tales ending badly. She wanted to leave the westerners feeling lucky or superior? Or just wake us up to the injustices of the world? I’m not sure.

If you understand the culture a bit, the stories are fascinating. If you don’t, they’re still fascinating, but you could walk away with the wrong perceptions of what it means (or how THEY feel about it).

Many will get things they might not have imagined: a bustling fairly modern city — with Valiasr street (a historic road through Tehran), and how the rich live in the North, the rest live in the South, and how there’s all this complex hypocrisies. Mullah’s that visit prostitutes by giving them temporary marriages (for days or a few hours), girls that save their virginity by having anal sex (claiming it is the anal sex capital of the world), how the punishments for being gay varies depending on if you’re the bugger (100 lashes) or the buggered (death), yet gay sex is not that hard to find (even risking death), because of the segregation of men and women (and few are put to death: but the threat of it, is a tool of intimidation). How everyone gets nose jobs or rich girls get their hymens repaired for marriage, while still claiming modesty and avoiding western ways. Then everyone has bootleg CD’s of Western Music, illegal alcohol, and Satellite dishes to watch western shows. Even their justice is somewhat random and shifting: like if you’re rich, you can often pay a beggar to take your lashes for you (someone must be punished, but it might not have to be you).

So I thought it was a fascinating read (or listen, as I do a lot books on tape while I walk). But she’s not a sociologist, or someone that seems to either get or care about the nuances of culture, or the history of tradition, or even their cultural perspectives. (She focuses on the individual perspective without the context). So you get stories, fed to westerners, from a western point of view, without offering the tools and nuances to understand why these behaviors are normal, or how THEY think about them.

For example, Japan and Iran have this element of their culture about the public and private faces of things (separate lives), so of COURSE getting caught doing something in public that everyone does in private is understood to be just deserts. And they know the rules and nuances that will get you in trouble or not. (So it’s not as hypocritical to them, as it seems to us). So there’s lots of rules that she’s sort of pointing out the irony of, without the backstory. Don’t get caught drunk in public, but party hearty behind the garden walls. Imagine other cultures dealing with Americans that say “I’ll call you some time”, when you don’t really mean it. Why would you say that and not mean it? Some things just don’t mean what you think they mean, and you have to get into the head of the culture, to get it.

Jon Stewart interviewed her, and made jokes implying that our poor are religious and uneducated as well, or the injustices of wealth in our system, whereas it’s the educated liberals from which everything good and fair comes from. She ignored or glossed over that things don’t map quite the same across cultures, so it’s not vaguely the same (or not in the way he thinks). But then Jon isn’t smart enough (or is counting on his audience not being smart enough), to realize that the Iranian revolution was actually started and fueled by the Social Justice Warriors (college kids), and how the Mullah’s and the Revolution would be considered a leftist religious movement. (It was pro-workers, pro-poor, or just the rich college kids that empowered it).

So you get interesting stories, but sometimes lacking context. But you do get a glimpses of what life is like, for the most oppressed (or those that didn't follow the rules). It's an important side of the coin -- and a great read. But it's also important that you remember anyone could write a similar book about an American businessman whose livelihood was destroyed by some anti-smoking or environmental regulation or water policy change in California. So likely valid and interesting stories, but there's a larger context she doesn't address as well.