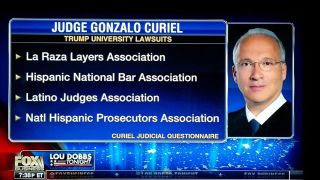 Context matters, and there was a lot of context before Trump calling a Judge's objectivity into question.

At this point the left goes nuts and accuses Trump of being a racist for implying that the Judge is biased because his parents were Mexican. But they're lying (omitting): the full context is it wasn't about him being Mexican/Latino, it was about him offering what Trumps' Lawyers thought was an unfair ruling AND being a Mexican Activists, AND Obama appointee, AND knowing the AG (key lawyer on the other side). Most of those things are slight exaggerations, but that’s how they perceived it, and they were responding with THAT context.

But let's use our brains:

Q: But isn’t it racism to say a Judge wouldn't be able to do their job, or would do a different job, because of their race?
A: Well if that's the case then what can you say about identity politics and we should put Women or Latinos (or both) on the Supreme Court because of their identity (and that will give rulings different biases)?

Look no further than the words of Supreme Court Justice Sonia Sotomayor who herself suggested that her latino heritage played a role in her decision making:[1]

Sotomayor was called controversial for these claims at the time of her appointment (by conservatives), and leftist rabidly defended her, claiming it was her biases of gender and ethnicity that uniquely qualified her for the job. If identity doesn’t matter, then their whole affirmative action being needed diversity arguments fall on their face — so democrats have always argued that “of course, it matters!” So the left is trying to have it both ways. Race/Culture/Gender make a difference in judges when it suits them. But if you point out that the judge may be biased by their race/culture/gender/causes, why that makes you a sexist/racist pig?

And don't think she's alone in self identifying bias, Ol' Barry Sorrento (aka Barack Obama) did the same thing. In 2015, immigration Judge A. Ashley Tabaddor sued Obama's Department of Justice after they forced her to recuse herself from “all immigration cases involving Iranians”, because she was Iranian.

A lot of this was probably created by Trump and his lawyers confusing the La Raza Lawyers Association (a latino scholarship) with the National Council of La Raza (a radical latino advocacy group)[2], so they thought the Judge was more of an activist than he was. Still, that point that the judge belongs to a latino group and supports the point that he might not like Trumps politics. At worst, that shows that Trump is a loud-mouth buffoon that doesn't fact-check as well as he should have, but not that he's a racist.

And for those that go with the distraction of Trump University lawsuit that at least that case shows that Trump is corrupt for duping students, then that opens a real quagmire for the Clintons, because it turns out, they did the same thing only far worse. Bill Clinton endorsed Laureate University as their "honorary chancellor". They do on-line courses in the U.S. and latin America, and paid him $16.5 Million for the endorsements over the years, only now there's multiple class action lawsuits and claims of fraud, and failing to live up to standards. Isn't duping poor latin Americans more racist that duping rich real-estate investors in the U.S.?

In the end, there's a lot more evidence that Trump is sloppy with his bloviating than that he is a racist -- those attacking him are either ignorant of the most plausible explanation, or are intentionally deceiving the gullible by pretending this has anything to do with race and they know how he feels. Either way, their idiocy forces me to defend the truth against their falsehoods -- and I hate having to defend Donald Trump. But we have a choice, to live in a world where the truth matters more than the politically correct mistruths, or sign up to live in the Democrats alternate reality, where spin matters more than the facts. I'm still opting for the former, how about you?