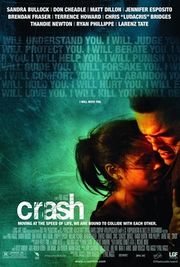 I remember hearing that Crash was a great movie that won all sorts of awards (back in 2005) and I'd never got around to seeing it. It was on Amazon Prime, so I watched it. What a craptastic mashup of moronic plots, clichéd angry racists, and absurd dialog. It was anti-American propaganda written by cluelessly pretentious Canadian Marxists, who never lived in the city but stitched together every racist ghost story that anti-Americans tell each other at parties, into one implausible week of events. Which is why Hollywood loved it: it's what they imagine L.A. to be, from behind the locked gates of their Brentwood estates.

I was watching the train wreck and thinking, there has to be something redeeming in this for it to win 3 academy awards, and earn a 74/88 on Rotten Tomatoes. I was mistaken.

According to this, everyone in L.A. is an angry racist, Iranians run convenience stores, and all their lives are intertwined in a menagerie of racial animus. The poor people were mostly good, the rich people are all bad. The cops are all racists (or beaten down blacks just trying to survive in their racist departments). But if you make a contrived enough plot, most things will magically work out in the end for people you can't relate to so don't really give a shit about. And you can win awards for hating America as long as it makes Hollywood types feel superior and sanctimonious towards everyone beneath them. I had to look up Paul Haggis, the Canadian director-producer named after an offal crammed sausage, and thought, well at least he's living up to his moniker.

Being from L.A., I did deal with some of it. I taught cops for years (Martial Arts). I worked in Watts and lived in Inglewood. In half a lifetime, I could count the number of experiences where someone said or did something as dumb/offensive as was in any 5 minutes of this film on one hand... without using my thumb. One black roommate's offensive parents. I've never heard a white person in California person talk like these people talked behind closed doors, and I'm the kind of person people often confide in. I'm right of center, extremely open, and not judgy: many people confide in me, especially about things that aren't politically correct. So while I don't doubt there are a few bigots in the world, the number and degree is completely blown out of proportion when the only non-racist in a film seems to be a white female cop fucking her black partner, and a right-handed rookie who occasionally keeps his gun in his left pocket while driving so that he can accidentally shoot innocent hitchhikers. A horrid waste of time and bandwidth.