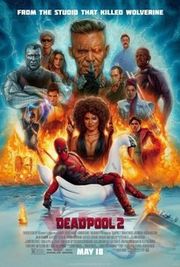 If you liked Deadpool, you will like Deadpool 2. Sequels are never as "fresh" as the original, but you're going to watch them for more of the same, and that's what you get. Lots of snark, dark humor, occasional talking to the camera, fast talking and fast action, with hysterically inappropriate humor that appeals to the 14 year old boy in all of us. Loaded with adult innuendo, language, and so on, if you want 2 hours of immature escapism, this movie is for you.

Just like the first one, this role was made for Ryan Reynolds, and he played it perfectly. And all the other characters worked. it was filmed in Canada, so Canada was properly mocked. The only thing missing was Stan Lee's cameo, though he might have made an appearance when I was taking a leak. One of our local cinemas did the revamp with recliners and food service, etc. It was a nice improvement. I'll pay a little more to not have armrest wars with the guy in the seat next to me, so that was a win too.

Plot summary: Deadpool (the anti-hero whose superpower is that he can't be killed) teams up with Negasonic Teenage Warhead, her hot Asian Girlfriend (Yukio), and the tin man (Colossus), to help an unstable young mutant "Firefist" at the Essex House for Mutant Rehabilitation (Orphanage for troubled kids with superpowers). And, when that doesn't work, he creates team X-Force (X stands for expendable) to protect the young mutant from a cybernetic soldier from the future "Cable". And then they proceed to reek havoc on the city, its prisons, and a linear timeline, leaving a trail of bodies that is reminiscent of Cambodia, all in the name of the greater good.

There's mocking everything, the blind, the infirm, racial stereotypes, and pretty much everything else. With more pop-culture quips, puns and references than Family Guy, so of course a few snowflakes got offended. Fuck em, it's crass humor, and nothing is off limits.

This is not a serious SuperHero movie, but for me, it was seriously fun, and far better than Avengers: Infinity War.