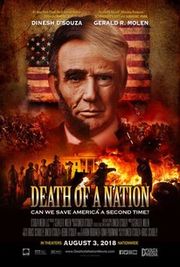 Dinesh D'Souza's latest movie is "Death of a Nation". And it perfectly exemplifies the bias in movie reviewers. Rotten Tomatoes Score: 0/90. Not a single reviewer liked it, 90% of the audience does - and that shows how of our touch or biased the reviewers are. Remember, this is the first of his movies to open in over 1,000 theaters, and his documentaries easily out-earn most (usually putting him in the top handful of documentaries of all time).

What about the movie?

It's a documentary that details things that infuriate the left including:

These are all well documented and easily researched facts. So some far-left Historians hated it and said it was misleading -- despite the fact that it is littered with clips, quotes and evidence. As I've dived into all this long before this movie, it was a little shallow (surface stuff), but the deeper stuff supports the macro point even more (it would just be too dry for a documentary). And it still offered some good examples, or clips that I hadn't seen. So while it is a shallow and high level overview, from a definite right wing perspective.... and it does cherry pick and glosses over a lot of nuance has to get glossed over to fit the format -- it's far more accurate than the average historical movie or documentary that comes out of Hollywood. And if you dived into the nuance and counter-factuals on both sides, it would become dryer, and more boring, but still have many of the same macro-conclusions:

So it's pretty good, not great. Most of it was rehash for me, and a bit shallow. It doesn't deserve a 0% rating as it is far better and uses far fewer dirty tricks than a Michael Moore film, that the same reviewers and critics will all love -- not because they really care about the accuracy or omissions (or that documentaries have to go a mile high and an inch deep), but because it preaches things they want to believe. The fact that Moore's less accurate, honest, and does far worse in all the areas they'll criticize Dinesh for, just proves their bias more than his.