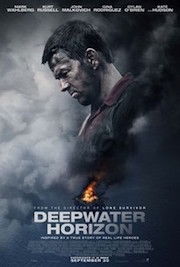 You'll laugh, you'll cry, you'll kiss 9 bucks goodbye. You can love it, hate it, or both at the same time. The short version is that I liked it as entertainment, but didn't as a movie about a real event.

I'm leery of Hollywood doing history, it turns out tinsel-town is kinda superficial and shallow. I know, who knew? Well that's reflected in the historical accuracy of almost everything they touch. Even their best autobiographical and historical movies (like Saving Private Ryan) are a bit tarted up, and about as deep as a Kardashians makeup mirror. But they can still be entertaining. Well, Deepwater Horizon the Movie is no exception.

From a Historical perspective, and understanding what happened, you'll probably be a bit disappointed. As they say, "if anything they wanted wasn't real, it's OK, they'll just make it up". And the events magically matched a totally cliché plot-line that Lionsgate wanted to tell, and should appeal to Hollywood producers and gullible college kids. It hit all the right notes:

If that included any spoilers, you haven't been paying much attention.

It wasn't quite as trite and overdone as something like [1]. But Avatar had the luxury of being sold as fiction/fantasy, this is sold as being a true'ish story. And it was true'ish: there was a boat. It went boom. People died, it sunk and oil spilled. And some of those events are loosely portrayed. But it was still far enough off reality, that the families of the Deepwater Horizon have banded together to crowdsource the funding to tell the true story, in a real documentary. Which, to quote them, is the true story, "of the comradery, friendship and fearless operational execution of a team and a vessel that was best in class for many years". And how they set world records, made multiple major discoveries, and assisted in the U.S. becoming energy independent again. And I assume it's tragic demise.

All that bashing aside, as entertainment it was pretty good.

Mark Wahlberg as Mike Williams was likable. Kurt Russell, John Malkovich, Gina Rodriguez, Kate Hudson, all do respectable jobs at their craft. The movie flowed well and was entertaining. The acting was good, sets interesting. Dialog followable. You could bond with the characters, follow the plot, and cared about what happened. I was rooting for the characters, and the suspense was timed right. And it had the obligatory clips in the credits, showing the real people they portrayed. (Slightly less pretty and more real versions of the actors). It hit the right notes in a completely watchable performance.

So the movie worked. It certainly wasn't so dumb and off history that I wouldn't see it, and I enjoy the movie as a fictionalized version of real events.

If you want to see an entertaining thriller type movie about a drilling ship where you already know the ending: this will probably be the best one of those you see all year. Maybe even for a few years. But if you want to see what really happened in any more depth than listening to Noam Chomsky lecture you on the evils of capitalism, then you might be disappointed. So the story was interesting, even if the message and agenda was shallow.

So just go in with the right expectations, relax, and it won't be the worst movie you see all year. And for entertainment value, it's more memorable than most.