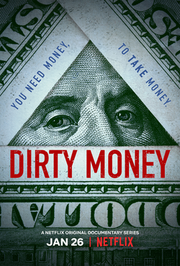 Netflix produced a 20/20 style documentary series called Dirty Money. Only this show doesn't have the constraints of a John Stossel, who is likely to wakeup one day, and realize how unclean his Michael Moore style one-sided Marxist propaganda is.

So while the show is interesting, and watchable, it's completely dogmatic, one sided, and filled with lies of omission and commission. It reminds me of High School civics, history, social studies, all over again: though this is slightly more interesting.

It's sort of a documentary, in the same way Joseh Goebbels made documentaries. As the Director/Producer Alex Gibney said, "Objectivity is dead. There's no such thing as objectivity. When you're making a film, a film can't be objective."

Alex's stepdad was the the infamous wife-beating peace-activist, president of the well-known Soviet front organization (SANE/Freeze), clergyman William Sloane Coffin. Alex seems to have learned his balance and moderation from somewhere: as he doesn't even try to present both sides, or trust his viewers... and his shows reek of a far-left, authoritarian (posing as an anti-authoritarian) world view (he writes for HuffPo and the Atlantic, in a "speak only the truth to power that power wants you to speak" kinda way). Thus, being an unimaginative follower of the progressive agenda, he's loved by the Hollywood and the media, and wins all kinds of accolades, but he is as balanced as a one-legged stool.

However, other than trying to further his biased postmodern-marxist agenda into duping his viewers that everyone in business is bad/corrupt, the actually stories and presentation are interesting. And despite his best efforts, some truths slip through the plot holes. So while he exaggerates some information, bury's counter-factuals, and is selling you on his far-left ideology, it is well produced/directed (he has talent), the stories move along well, you get a lot of at least one-side of the truth, packed into one hour shows, and dare I say it's very entertaining.

So if you're a skeptical person (critical thinker), and you take notes or research/think-through what he's leaving out, or you just like to hear what the other side of reality thinks of everything, the show is quite valuable -- and I completely recommend it.

If you're the type that believes what you were taught in school, see on CNN, MSNBC or read in the NYT without question -- then you're already programmed enough. And all this dose of confirmation bias is going to do, is enrage you more at the injustices of a corrupt/broken system, and push you that much further into the land of snowflakes, social justice, and intersectional activism.

In other words, it's fine for people emotionally over 40, and horrid for people under 30... whatever their actual physical ages are.

The first episode of Dirty Money was fascinating. It interviews the key people involved, talks about the issue, how it happened, how the government stumbled on the truth, and in only 7 years, got around to doing their jobs (partly because of VW's stonewalling and distractions). It even accidentally mumbles that the other auto-makers were doing the same thing. The only thing it left out is "why?" Why would VW take this risk?

You're spoon-fed the ideas that it was just greed and arrogance that caused the callous disregard for the planet. And I'm sure greed and arrogance were part of it. But it forgets to hint at the truth: the regulations were unmitigated bullshit. The truth was it was because CARB and the EPA set unreasonable and unattainable standard, and so VW had a choice of surrender a market, or cheat. You might not agree with VW's decision, but if you don't know why they did it, then you don't understand what happened. This documentary (and most of the media) leaves you ignorant of why, while feeling like you know more than you do. It turns people into progressives: arrogant, ignorant and sanctimonious (or worse: willing to lie for their cause).