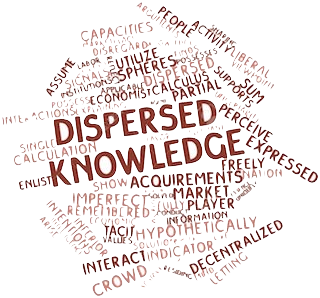 During the 1920's and 1930's, there was a big of a battle in economics between two famous economists, Maynard Keynes and his Keynesian models, and Federich A. Hayek defending Austrian Economics.

What was it about?

The basics was that Keynes was an advocate of Progressivism/Socialism/Fascism's idea that a planned economy would outperform the chaos of classical liberalism and the "free market". He posited that If models work on a small scale, then certainly it was reasonable that they could work on larger scales, and thus planners could tune entire economies to run better than if they were left to their own devices. This fit the progressive ideology that "brain trusts" should rule the plebes, and it was riding a wave of public superstition. The USSR had just been created, Germany and Italian Socialism (Fascism) as well as Japan's military authoritarianism seemed to be working, and while the New Deal was later shown an economic disaster, we had just suffered a major depression (made worse by Government mucking with the money supply at the time, but they didn't yet understand that). So Keynes was popular with authoritarians that loved selling these ideals to the common man.

F. A. Hayek came from the other side of the argument, defending classical and neo-classical economics, which was based more on observations of people and economies, than on the theory of mathematical models. We could tell from observation that Socialism/Planning wasn't living up to its promises, and we have far more examples today. So while Keynesian ideas of planned economies were intriquing in the 1930's, after WWII, it became even more and more apparent that the 19th century Socialist/Progressive ideals of Keynesianism were failing miserably in the 20th century. The New Deal's had flopped (there had been two of them), Germany/Italy/Japan's planned centralized utopias had turned to ruin, Russia was an economic disaster and America's production had saved them in WWII and from some famines, China soon would be suffocating under their central/planned authority, and later dozens of other examples that disproved Keynes theories in the real world. (Venezuela, Cuba, North Korea, Cambodia, and so on).

When the war ended, Truman desperately had tried to convince the public that while the New Deal had been a disaster, and the New New Deal (done a few years after that, and before the war), had also failed miserably, but that what America really needed was a New New New Deal -- otherwise Keynesianism predicted that all the men coming back from the war and flooding the workforce, and Government cutting back on War-spending, would be economic ruin! Yet too many Americans had fought for liberty and against planned-economies in the war, and they knew the bungling inefficiencies of Government control (through their military command) to buy into it. So Truman's New New New Deal went nowhere, Americans wanted to be left alone, and to go back to a free'er market. And instead of this leading to disaster, it lead to one of the biggest boom-times in our history, completely destroying what shreds of credibility that Keynesianism had left.

Later, the 1970's and Stagflation broke the fundamentals of Keynes' models, by creating a reality that couldn't be accounted for. Then Japan bought fully into Keynes's ideology, leading to what is referred to as "the lost decades", going on 3 decades of stagnation, after turning the hottest global economy of the 60's, 70's and early 80's, into the stagnant indentured servitude of the late 80's, 90's, 2000's, and today. This should have been the epitaph for Keynes's mass hysteria, but alas, the left is resistant to growth. So they remade the models into "New Keynesian" and pretended the failures (and history) have never happened. And some still stand by these flat-earth theories of economics.

So Hayek knew he was right and had been vindicated by history, but history proving Keynesianism wrong was only half the battle, but he needed to explain how and why it happened. 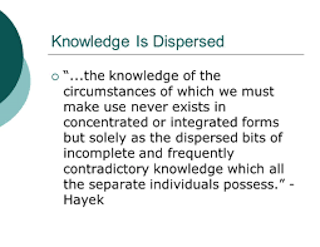 Socialists (Marxists, etc), always complain about the redundancies of capitalist systems: there’s duplication of efforts, and “too many choice”. Superficial logic makes it appear that duplication of effort is waste (inefficiency) that can be optimized through command economies reducing choice to only those needed (someone at the top planning and guiding decisions). But historically, all data/evidence shows that these centralized command economies like Socialism/Communism/Fascism (or even the Socialist-Lite Keynesianism), underperforms free-market capitalist societies over time. Hayek was interested in why Socialist logic didn't work.

Hayek got his nobel prize in economics for showing one of the many key reasons why (and how) the former (too many choices) almost always outperforms the latter (too few). The answer was Dispersed Knowledge.

In a company/society the people that know the most are NOT at the top, but spread throughout the system (and usually more at the bottom -- closer to the problems). Thus the more information you have to push up the command chain, and wait for decisions to come back down (in the perverse game of telephone / Chinese whispers), the longer it takes to get those decisions made, and the worse most of the decisions will be (because they’ll be based on partial information, with biases and agendas injected).

Thus the more decisions are allowed to made by those closest to the problem (by the engineers involved in the problem), the better the average solution/decision will be. The knowledge is dispersed. Some strategic decisions need to be centralized, but the more you centralize decisions, the less efficient the system becomes. Ta da.

The counter-argument is if knowledge is dispersed (distributed), then how can the system tune itself without authorities driving things? If one thing falls out of whack, then in theory, without communications, this would impact other things that didn't know of that, and problems would cascade and things would fail. But he worked on explaining those as well. He explained how changing prices are price-signals, that communicate to others scarcity or other things, and systems can self correct faster than planners can even recognize there's a problem. This all showed something called Spontaneous Order : that systems like a free market could self-organize far better than planners could organize them -- and they constantly refined and optimized themselves, as long as you weren't interfering with them by setting price and wage controls, or other things that would muck with that signal.

Another major contributor has to do with evolution and competition. Free market competition leads to innovations resulting in reward, so there’s incentives for improvement. But in command economies, they value conformity to the community and systems in place, so there’s less innovation, especially of the disruptive kind — the status quo is built around what is, which is “good enough”, and questioning that, is arrogant and challenging authority. In collectivist societies, you almost always get a variant of the Law of Jante stifling change agents and teaching the culture that conformity to the collective is more important than any incremental benefits — but if you suppress enough minor benefits/innovations, in aggregate, they give you significant competitive advantages, that can’t exist without competition.

The point is that consumers know what they want/don't want more than the central planning authorities ever can. Even if the central planners were geniuses, and picked the best product for any given time - their action would stifle competition and innovation, so over time, they will fall behind. Thus the countries without those controls will have their products continue to get better, while the others will stagnate. So even if they were more efficient in the nanosecond that decision was made, the quality of that decision will decay/stagnate over time -- and once again, the free market and capitalist system will outperform it. This is why the USSR, Communist China and other centrally controlled economies always underperformed the Capitalist ones. And always will. (Hayek went into this more in his book with the self-expanatory title, "The fatal conceit: The errors of socialism". London: Routledge. ISBN 0415008204)

The Japanese (Toyota) took this lesson to heart with Kaizen (their rip-off of our/Demming's ideas on continuous improvement, or later TQM). Basically, anyone on the line, can stop the line, and fix a problem in the process. It costs you more in the short term by stopping the line, but it saves you in the long run, by fixing the problem that will impact hundreds of future things being made, and these changes aggregate over time, making a much better product. By empowered the bottom, they make a better product, and now teach these lessons to other companies as “the Toyota way”, but really, these concepts long predated them.

All these things together, are sort of the explanation for what Adam Smith called "the invisible hand". We knew that in economics, the systems you left alone worked better than the ones that were planned/controlled or governments fixed. But other than the inefficiency of government, we couldn't explain why. Adam Smith said that the results of individuals' efforts to pursue their own interest may frequently benefit society more than if their actions were directly intending to benefit society -- these unintended social benefits were like an invisible hand that guided us (and the economy). But other than mystical, moral and philosophical explanations, he couldn't explain the economic mechanisms of how and why it worked, or why the alternatives of centralized planning didn't work better. And that's what Hayek did.

So I often shorthand it: 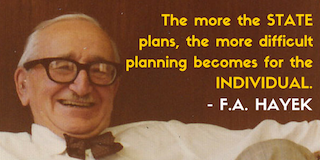 It's not the whole story, but it's still a distilled essence of it, that can be explained simply enough that even some knowledge resistant lefties can understand.