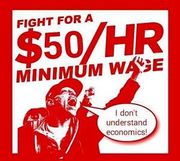 This is of course hotly contested, but it breaks down into two camps: (1) "No" (2) Those who have a clue as to what they're talking about.

The problem is (of course) that it doesn't always, and doesn't always immediately impact it. So there's some plausible deniability for the economics deniers out there to find edge cases and say, "see". But as soon as you look deeper than the surface, you find that it does suppress growth, or increase a decline, sometimes ahead of the law and sometimes well behind it but it happens, and it especially hits certain segments and groups of people harder than others (like teens, starting out, part time work, and so on). Let's dive into the evidence.

Logically and historically, “yes”, raising the minimum wage hurts employment. There are lots of studies or politicians that will tell you the opposite, and they have some weak data to support their point. But the real economists can poke holes in their studies and reasoning.

Some of the common mistakes in the bad studies include: 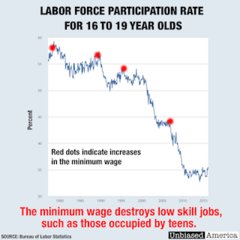 Studies that looked at subgroups most likely to be hurt by raising minimum wage, show exactly what you expect: it hits some people more than others. Downward moves (or hiring suppression) often happened in advance of enactment (labor markets scare easily). And any logic shows that if you raise all the workers pay by an amount, then the goods/services they produce will have to go up by at least as much -- and then everything the worker buys goes up by at least that much, meaning a best case net zero effect for that worker (and a negative effect for everyone else that had savings that wasn’t inflation protected) -- and more realistically, since there are margins to cover at multiple stages, things will go up by more than just the cost of labor (they go up by the cost of labor + margin), meaning a net loss for even the workers that think they benefited.