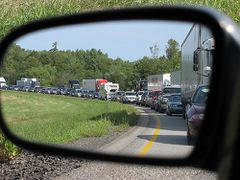 But all the other kids are doing it?

Yeah, I know, it feels safe to, "cover your butt": "Hey, nobody saw that coming", "at least we're not alone", or "I shouldn't be fired for following best practices". But it doesn't matter if you drown alone or with a ship of fools, because you still drown.

You weren't hired to repeat others mistakes, but do your job: which is make decisions based on what's good for this company (and avoid the mistakes the competitors make). This world doesn't need more lemmings, it needs the few that will think on their own, take reasonable risks, and try to do the best for the company, not just the safest or easiest moves for themselves politically. Governing by consensus leads to everyone failing equally, and no stand-outs to learn from. Of course, if you can’t learn from successes and failures, it may not matter either.

Challenging the status quo often gets blank stares or reflexive resistance, "if it was such a good idea, then why aren't the others doing it?"... and the usually unspoken response is, "because they have enough chickenshit followers in their management chain saying the same things you are, that they're missing the same opportunities as we are."

All new trends, emerging market, and organizations that became big businesses, did so based NOT on following others; but by surfing the wave of a future that others had not foreseen and had failed to predict. It's called leading, not following. All right, maybe Microsoft and Apple have some exceptions; but exceptions are rare, and you are not Microsoft. The point is that business is too often done this way because it is easy for managers, and too few are held accountable; not because it is good for companies.

Frederic Hayek won his Nobel Prize by showing that in economics, there's something called the dispersed knowledge problem. Basically, the reason command economies (Communism/Socialism/Fascism) usually fail to perform as well as capitalist economies, is that knowledge is dispersed though the system. The people on the bottom know more about the specifics than the people at the top. Thus the more layers that information has to go through before decisions are made (and the more layers those decisions have to flow down through), the worse the decisions will be (the more potential for error), and the less efficient the system is. Thus, the more you delegate and allow the system to make decisions lower in the chain (closer to the problem), the faster and better those decisions will be made.

There are exceptions, you need to have a vision and some strategic decisions: but those are far fewer than the thousands of tactical ones that you need to give room to be executed without a committee, or the bottleneck of a few clueless bosses trying to guess the right path. And if they are top-down decisions, the ones made with the ability to listen to all the consequences (and hear what the people closer to the problem are saying), the better those decisions will be.

Big companies are just that; big. They are slow, and reactive. Occasionally, a rogue group in them escapes the political mire long enough that they can innovate or do something without corporate micromanagement and bureaucracy crushing them under their jack boot, but that's often oversight. The few teams that luck out and succeed are the exceptions (the ones escaping the evil eye of Sauron), not usually the ones with the most scrutiny. Big companies usually aren't in business to take more risks and win more markets; they are in business to keep the markets they have. As a smaller (or mid sized business) you don't want to follow them, you want to stay ahead of them: their leftovers aren't worth having, so you have to get there first and let them eat your scraps.

Rarely, you can play by someone else's rules and still win the game. You can choose their tools, and their processes, and their markets, and just do things better, and still win. But if they are big, and you are small, that is not a good bet.

The past is not the future. While it might be good for managers to mitigate their personal risks by just following; it is not good for most companies. You can be a consulting firm, offering the safest path, lowest risk, and best practices on everything: if your goal is to be a bland operation oriented role. But if you want to be in tech, you can be much more efficient if with leaders (and not followers) at the helm, that were piloting their organization based on the future trends of the industry (not the present or past trends of others in the industry).Of course you need to know what is going on in the industry around you, and not be a risk monger and try to jump ahead of every new trend as well. There are always balances. But the art of being a good manager and leader is learning these balances and when to take these risks. Too many never learn this, and sadly the organizations and people they are responsible for and to, often pay the price.