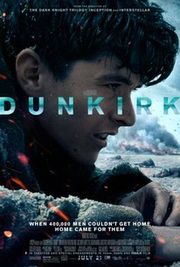 This wasn't bad, but it was a bit of mismanaged expectations. Many will go in expecting a Historical War and action movie -- what they'll get is a vignette movie telling 3 different stories, with overlapping timelines. A British soldier pooping and fleeing from the pending german advance (over a week), a British guy with a boat coming to save them (over a day), and a RAF pilot (over an hour), and how those stories intersect. If it sounds overly complex, it is, but the stories individually aren't bad -- the same with the movie.

Reviewers liked it more than viewers with a 93/83 rating on rotten tomatoes. I was more with the viewers. It was a good 3 or 3.5 out of 5 star movie. Solid, well written, reasonably active, well filmed. But a little overly complex, and not completely memorable. It told a few stories well, and I felt like I got my value out of watching it, but it didn't move me in any way.

That of course got the rational people to play "mock the historically illiterate".

But overall, it wasn't a bad movie. It just wasn't as good as many had lead me to believe in might be. Plus I saw Hacksaw Ridge (2016) on HBO the same weekend, which was a far better war movie, and movie in general. So Dunkirk was eclipsed by a better film.