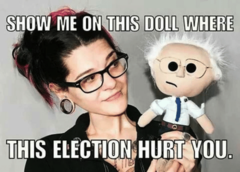 After every election that the democrats lose, a faction starts coming out in force and explaining why we should eliminate the electoral college[1] Which is especially ironic if their selective amnesia didn't interfere with their memories of just weeks before the 2016 loss, they were excitedly talking about how the electoral college could help Hillary prevent President Trump from coming to power, even if he won the popular vote. After they lost, the tone flipped 180° without a picosecond of introspection, or the slightest bit of irony.[2] If you want to understand the full force of that irony, remember Obama lost the popular vote to Hillary in the primary (but he had more delegates), and Hillary lost the popular vote to Bernie Sanders (but she had more delegates): so neither of them would have likely been President if they practiced what they preached. But when some people lose, they want to retroactive change the rules, and get mad when you call them bad sports for doing it. However, if you have any clue about civics, history and human nature, you have an inkling of why the electoral college was created, and why eliminating it, would probably destroy the nation. [3]

The Electoral College is why we have a Country

Ignoring the DNC's omnipresent hypocrisy, the electoral college is what allowed us to have a nation instead of a federation (confederation) in the first place. A good book on the subject is James Madison (by Kevin Gutzman) and the creation and signing of the constitution.

Summarized: Virginia had more population than the other colonies. In a pure democracy they could bully the rest, and eliminate any cultural diversity and conflicting interests. The other founding fathers knew that would never fly (with their states or people) and thus was doomed to failure. (Slavery would have been forever, and the other people/states would never buy-in). So they needed to make sure that power was decentralized, as was flaws in the system. (One state could not dominate). They had to weaken nationalism, to get federalism.

How did they know this was a good idea (or pure democracy was a bad idea)? Unlike progressives, the Founding Fathers (especially James Madison) had read the failures of all the other democracies going back to the Greeks, before creating ours. We wanted to avoid their pitfalls, and strike a balance between local and national power -- to avoid the civil wars, or disunion of either extreme. To allow our nation to grow and unite, despite dramatically different cultures and interests. The electoral college was intentionally written in to reduce the odds of things that had created disunion throughout history.

So at least part of the the purpose of the electoral college was to prevent a geographic minority from bullying the rest of the nation (as well as a final vetting)-- and without the electoral college, we wouldn't have a Nation, we'd still be a confederation of states (or we would have had more civil wars).

That is why we're not a democracy: we are a constitutional republic. This wasn't some 18th century accident or quirk, it was part of the fundamental design so that no one flaw in any one states "democracy" or election could overpower the rest -- and a President couldn't just appeal to a few populous states or cities and ignore the rest. Win-win. Unless you're a really angry cry-bully that loses... and really, really wishes you could force the others to do what you want.

California vs the rest of the Nation 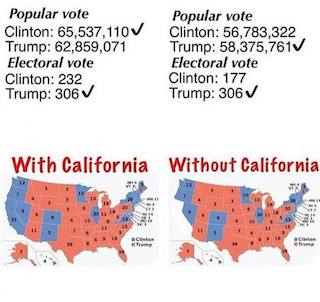 It's not like California is morally consistent, they prefer winner take all over over a statewide popular vote on all sorts of issues (like their electoral delegates). If they really cared about one-person=one-vote they would have started there, or supported the multiple efforts in the past to allow proportional delegates. But they resist popular votes whenever it doesn't help democrats.

NYC vs the rest of the Nation 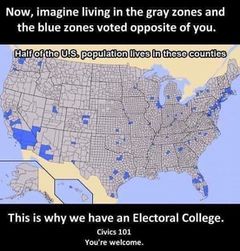 It gets worse if you look more locally (by county). Greater NYC was the same, without it, Trump would have won the popular vote in the rest of the nation. One metro.

Question: What is moral about 50%+1 vote deciding they get to enslave or abuse the other 50%-1?
Answer: it isn't moral.

So the purpose of a MORAL constitutional republic is NOT to empower the majority and demand consensus/conformity, but to PROTECT the minority and individuals from them (ensure cultural and geographic diversity). Which you don't have in the consensus forcing pure democracy.

Thus if you understand those basic ethics, then a hybrid republic system, like the electoral college, helps protect geographic minorities (small states and regions) from a lack of diversity of thought. And thus "it's a good thing™". Otherwise a President just campaign in a few big states, get 50%+1 of the vote, and ignore the interests of the rest -- which causes friction between those little states and everyone else. Ergo, a few cities don't get to bully the whole nation just because they have more population than the rest -- and Presidential candidates must take into account what the little guys care about.

If you don't understand those ethics, and believe the majority should be able to do whatever they want, then that's not a constitutional republic that's democratic Marxism (or even fascism). Which the founders knew to be bad. (the ideas behind socialism and tyranny go back before the Greeks, even if the term Marxism was coined after a 19th century ideological moron).

Of course, to some little snowflakes, every time they don't get their way, they want to "fix" the system -- in both senses of the word. (To "make better", or to "rig" in your favor). And thus we get another wave of the NPV movement: or "National Popular Vote".

There's a few ways to fix the electoral college, assuming you're uninformed enough to think it actually needs fixing:

Article V of the constitution lays out the steps for getting an amendment. Of course, Constitutional Amendments are intentionally hard to do -- and progressives are inherently lazy (intellectually and otherwise). They want what they want, as easily as possible, and don't care how to get it. So they're not going to go through the option #1 of official amending process of (a) both houses doing a supermajority (2/3rd) vote (b) then 3/4ths of state must ratify it. That could take years, or never happen -- because 3/4ths of the states usually aren't as dim as progressives (to think it's a good idea to allow the few states/cities to bully the rest). And option #2 of getting 2/3rds of the House/Senate to call a constitutional convention to propose many amendments, and getting 3/4ths of the states to ratify them, is even harder. So doing it the right way, is right out.

Thus, if you're not going to follow the legal and formal process, and you have no integrity to defend the actual Constitution, what then?

You create an agreement (compact) that once the majority of the states (with enough electoral votes) sign on, it takes effect. And the compact is that all the States agree that they'll ignore their constitutional responsibility to vote according to what the people in their state wanted, and just assign their electoral college votes based on whoever wins the national popular vote. Tada: our Constitution is circumvented. Now it doesn't matter what you vote for in your state, your electorates can change and vote for whoever one the national popular vote instead. California can ignore what the Californians voted for, and agree to what the nation wanted. So much for their faux concerns about the individual -- it's more about the herd (as long as the herd votes Democrat).

It's a really bad idea, and here's a great PragerU video that sums it up:

If you do care about democracy (better representation) and the constitution, a better way to fix it, would be to change from Winner-take-all to dividing the electoral votes by the percent of support (more or less). This would allow for better representation, and is constitutional (since how states divide their electoral votes is a State decision). Maine and Nebraska already do this, it works fine -- though some partisans in the states want to force it back, "stop giving the opposition a voice". [8]

So in California, with its 55 electoral votes, instead of people who aren't in L.A. and the Bay Area being forced to throw all the electoral votes behind someone they disagree with, they could get partial credit. This gives the inland, South and North California better representation. But since L.A. and the Bay Area are progressive democrats that like bullying the rest of the state, they suddenly don't give a shit about "pure" democracy and representation. They want to stay and all-or-nothing state, to reduce any representation that the rest of the state might have: proving once and for all how much they truly care about the little guy. They are not making an effort for better representation overall, just for advantaging any system that lets their party win.

There's a set of delusional revisionism that's often repeated by the far left and their mouthpieces in the media, that "The Electoral College was created to appease the slave states" (and the South). There's only a few problems with that:

So anyone that repeats that fallacy (and omits that context, or can't reply to it) can immediately written off as either ignorant, dishonest, or both. And thus we know the FakeNews outlets include the following because of their misleading tripe and lies of commission and omission:

Remember, Trump and others won by the rules of the election: campaigning in states that could throw him the most electoral votes, and not wasting time in states that were all or nothing states and leaning away (e.g. California). If the rules had been different, he would have campaigned differently, and maybe still won.

It’s not just the candidates that acted different because of the rules, but the voters. A few people (self included), knew we weren’t in swing states, so we knew we were free to vote for 3rd party or write-ins (others didn’t bother voting at all, since their vote didn’t matter) — but if it was a national popular vote, many would have voted differently and turned out? We’ll never know, but we do know that the outcome/turnout of Hillary’s popular win would NOT have been the same. So popular vote means nothing, it’s like losing a drag race and pointing out that you got better MPG than the competition, like that ever mattered. It's an ego saving attempt by a fragile loser.

Every few elections people who have no clue as to the nuances of history, or failures of Marxism and democracy, are pretending that a pure democracy is somehow better than the hybrid systems we setup specifically to avoid the pitfalls that all other pure democracies fell into. But how do you educate those who don't want to be educated? The impatient and impetuous youth that will make up their minds, long before reading about a topic, or why something exists in the first place? These snowflakes want what they want, and they want it now, and damn the consequences. So that's where we're at.

Or as Penn Gillette said, "Democracy without respect for individual rights sucks. It's just ganging up against the weird kid, and I'm always the weird kid." And progressives and NPVIC supporters, want pure democracy (the tyranny of the majority) without any respect for individuals, geographic diversity, or having to think about what it would do to the nation when some people start disagreeing with their agenda. Like they said on the Titanic, "Damn the consequences, full steam ahead!"... right before they bullied the weird kid off of the life boat.