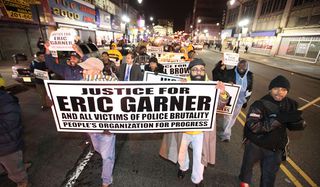 Truth: Stop and frisk was ended long ago because it was too effective. Tobacco smuggler (selling illegal untaxed cigarettes), and repeat violent felon (30 arrests including assault and grand larceny), was in poor health and resisting arrest. He was on bail for smuggling and illegal selling, driving without a license, marijuana possession, identity theft/fraud (false impersonation), and that's what the cops were taking him in for. He didn't die of Daniel Pantaleo's chokehold, he died in the ambulance that the police called for him, after had a heart attack violently fighting with the cops. Either his life was given up over his own stupidity, or over the lefts war on tobacco. The race baiters blamed a racist system, instead of admitting any truth or culpability by Eric Garner, or the law they supported that empowered the cops to arrest him in the fist place.

Obama jumps in, does nothing to correct the record, magnifies the problem, encourages the violence and frustration felt over black thugs being killed for resisting arrest, and being obese and in bad health. He sicks the DOJ on the case, then silently, nothing comes of it, because they knew all along that this was an unfortunate consequence of over zealous tax laws (local cigarette taxes making dug/tobacco smuggling profitable), and normal arrest procedures meaning that if you fight and have a heart condition, you might die.

Facts I've pointed out that only angered the delusional who wanted to believe the racist myth: