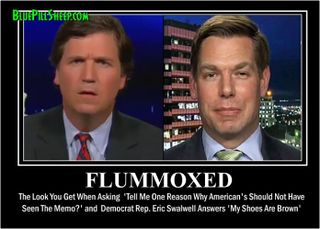 Eric Michael Swalwell is an obnoxious politician (ex DNC Presidential Candidate) from a district next to me. His defining cause was his fascist positions against guns and for Gun Control including door-to-door seizures and using nukes against those who resisted (his words). He spoke at my work as a representative of House Committee on Science, Space and Technology: he didn't have a clue on any of those. He lead a crusade for knife control (against lifting a ban against pocketknives at airports). I went in open-minded and curious what he had to say about tech, and I left with utter contempt and disgust that this guy was a member of my species. He made me unsure if he wasn't just Maxine Waters wearing whiteface and in drag.

Swalwell is the white-male Maxine Waters. Someone that was an embarrassment to his age, race, gender, party, government, country, and species. There are people in a vegetative state, that are having their last fleeting thoughts as, "man, that guy is stupid", and hating the nursing staff for leaving the TV on the news when this guy shares his views. I not only won't vote for the troll, but while I generally don't judge others... I will smile and silently think less of anyone who says they would vote for him.