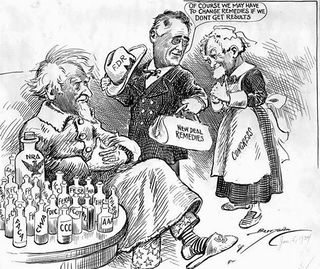 However by this time FDR had gotten enough people suckling on the Govt. teat that everyone wanted more of the same. The spending had hidden some of the symptoms of the depression. The people were being hurt by the policies in the long term (in the lack of opportunities), but the hand-outs were holding them over in the short term: the Democrats had locked up the ignorance vote. Borrowing from your (and your kids) future may cost you in the next few years, but if you're unemployed because of those policies, you care about this week. Plus there was open corruption: cases like temporary work cards distributed during election time that would entitle the bearer to two to four weeks of work, distributed by the Democratic party: "we'll pay for votes" was the message, and it came across loud and clear. It was completely illegal and a violation of all ethics, but those never stopped the Tammany Hall inspired election machine. Roosevelt won the election, even if poorer people paid the price. 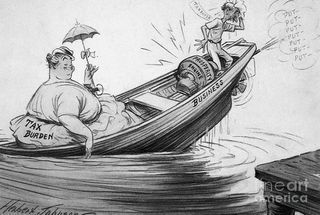 Of course things were not rosy for long.

People are taught about the 1929 crash, but few are taught that wasn't what ruined most people, it was the second Depression (a double-dip) that did far more damage.

The second one (caused by FDR's policies) was much worse than the first because now we had more debt, higher taxes, less freedom, and businesses weren't going to invest into these government take-overs and control. We were becoming the Soviet Union.

When Roosevelt sent his people to talk with business, they laughed them out of the meetings: he'd spent the last 5 years vilifying business and their leadership for everything, set up agencies to micromanage them, and now he was saying he wanted to ally with them? Businessmen knew more about what was going on than FDR.

Roosevelt was getting desperate, and talking with his aides about their coming defeat in the 1940 election: 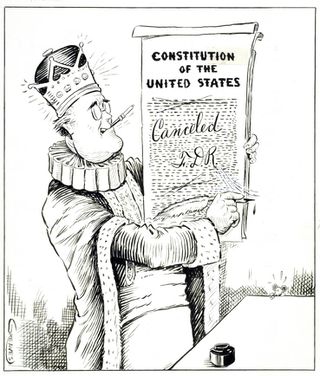 Roosevelt was also livid over the Supreme Court blocking some of his programs as Unconstitutional. They were unconstitutional, he knew they were (his own advisors had told him so) -- but was a retaliatory power-hungry individual. In a blatant attempt to usurp the Constitution (more than he had already), FDR put a bill before congress that would force all Supreme Court Justices over the age of 70 to retire, and allow him to put in 6 (or more) new Judges (who would be more sympathetic to his causes). His public rationalization was, "the Justices were old and slow and falling behind in their case loads". In fact, the Supreme court docket was (for once) fully up to date, which any lawyer in congress knew, and which was somewhat rare. But Roosevelt's arrogance had arisen to the point where he thought he could cram anything through congress -- and he was almost right.

Fortunately, even the most complicit and weakest congress in history, one that passed almost everything Roosevelt laid before them, would not go this far. There were enough votes to pass the law (too many feared Roosevelt and would have supported it anyway) -- but a few gutsy individuals held it up in committee and debated it, delayed it, and brought the fraud to the public's attention (for which they were later punished by Roosevelt). Filibusters and committees do have some value.

FDR was telling the public, via his Fireside Chats, what a good thing this new law would be, but the public wasn't that stupid. Roosevelt had sworn to his detractors that the public would support him, but fortunately a little sanity was left -- the public went against him. Before Roosevelt played his trump card (appealed to the public), he could have passed a compromise deal which would have still gotten his ends. It would have been to force only one Justice out per year, and only after the age of 75 -- which would have been enough to stack the court in his favor (like Wilson got to). However, his power play on the Fireside Chat let everyone know how weak his stance really was, so he lost that opportunity as well. Congress not feeling the heat of the masses actually voted correctly -- and this bill fell to an defeat to the cheers of congress. But it was very close for a while. We almost had the Executive branch (with the complacency of the legislative branch) overthrow the Judicial branch of our Government. It was still the most disgusting attempts to usurp the constitution by any President in our history.

Even afterwards, it seems the Supreme Court was scared into shape, because many seem to have had a change of heart, and many more decisions went in FDRs favor -- and in many cases "in FDRs favor" was against the constitution and precedent.

Just when things looked their worst (economically), Roosevelt got a reprieve: WAR. Or at least defense spending in anticipation of the war.

FDR wanted war, he needed the war, (needed an excuse for spending) -- but he needed to convince people he would keep us out of war. He could build up our defenses, and sell (borrow our money to give) our war-goods to England and Russia. He could posture, play, manipulate and drive us into a war (all with the glories of unlimited spending). Best of all, the states didn't have to worry about maintaining what the Fed built. Plus, joining the military got labor competition out of the work force.

Finally an excuse to borrow against our future, like never before.