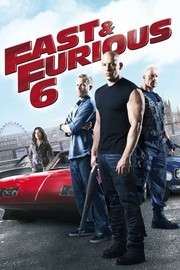 I always thought the movie was named after Vin Diesel's sex life: he's fast, and she's furious. But no, it's about cars, just like the first 5. The first one was kinda fun as an homage to the tuner culture, each one after that just keeps getting progressively more absurd as they go on in the franchise, trying to milk the gullible for another dime bag. If you're not OK with that, then this isn't your movie.

My wife follows the series, and it wasn't horrible. If you go suspending all disbelief, don't care about acting, plot, physics, or runways that are 26 miles long, it's quite enjoyable.

It has cars, airy chicks that are tough and like to fight a lot (without bruising or breaking a nail), and if everyone isn't chasing each other in cars, they're doing it on foot.

I could have done without 2 of the 4 different endings in the movie. And would have rather they tried tried to live within the limits of what vehicles can do here on earth. But if you wanted deep and real, you wouldn't go to a movie called Fast and Furious, or that had Vin Diesel in it.

More interesting than the movie

Jalopnik did a piece showing how car prices varied by country, by stunning the cast and crew with how much those cars would have cost. I wouldn't think they'd be a hard cast to stun, so this is kind of tripping over the bar you left on the ground. But still interesting: