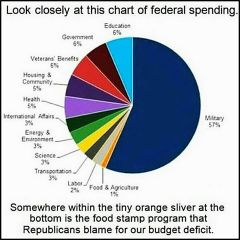 The first rule of politics: Democrats lie. They have to lie, because if they told the truth, they'd never get elected. This chart by the National Democratic Socialist American Workers' Party is a great example of how they lie. They cut out parts of the truth and the budget that is inconvenient for their cause -- like all the social programs, and then only look at the rest. Thus, people that believe charts like this, are either gullible rubes or liars (that don't care about the whole truth). 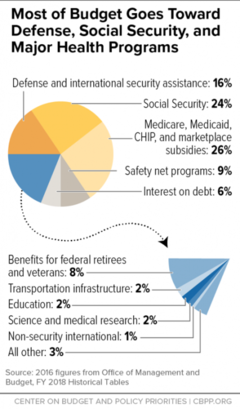 If you listen to FakeNews or the far left, they will try to convince you that the military is like 57% of our budget, and poor people are only getting less that 1% to chew on (table scraps). But pretend you're an honest person, with a triple digit IQ, and you don't want to huff the tailpipe of National Socialists dogmatic fumes. What are the real numbers?

Well, 24% goes to Social Security Medicare/Medicaid and other poor subsidies are another 26%, and Social Safety nets are another 9% (oh and the 6% that goes to interest on the debt, is also because of those programs). So that small, 65% of the budget was just omitted from the National Democratic Socialists version of the truth.

The reason is they call those things "non-discretionary": they invented a category that never existed before, and they claim since that category has no choice, that we can ignore it. Of course that's retarded, since everything is discretionary and can be changed. But it's a good enough ploy to dupe the ignorant or dishonest. Oh, and just to prove it's not accidental misunderstanding, they intentionally don't separate Military discretionary spending from military non-discretionary spending, they lump those two together and put them in the discretionary category, proving they're dishonest, even in how they're flim-flamming with their own terms.

If only that was where their dishonesty stopped. But wait, there's more....

What you also have to mention is that buried in the remainder of the budget, is more social programs. Benefits for federal workers = 8%. And then there's the military budget, which is 16% of the budget (not 57%).

What the illiteratti thinks is that the majority of the military budget is tanks and guns. But no, it's actually the greatest social program ever: workfare. If you're poor and you have no opportunities, you can join the military, get job training and a salary and earn income for doing an honest days work. It has always been an anti-poverty program.

The breakdown of that is 40% is operations, 27% is payroll (people, housing, construction), and 12% R&D and 21% is procurement. This doesn't count healthcare and retirement as those are paid for out of the general budget. But the point is that if you're honest and comparing how much social programs cost versus the military, then you should cut the military budget by 1/3rd.

The federal budget is like $3.8 trillion, and state and local runs about $3.0 trillion (about 80% of the federal government). And about 30% of their budget (about another $1trillion) goes to welfare, social programs and healthcare.

All that stuff before, also leaves out all the private charity and support, like churches and charities, that contribute to anti-poverty. This is not insignificant, private charity tracks as ≈$400B per year, which more than the military budget, less payroll. And there's lots of charity that's not reported (who deducts food they drop in local food drives, or money they gave to a relative that they can't deduct, etc).

Hidden contributions are also huge and hidden. Think of some state and local programs that pass costs on to others. Imagine rent control, or programs that require a certain percent of low-income or discount housing -- those are ways to tax real estate investors and force them to pay for housing subsidies, and keep it off the books. There's laws like Hospitals can't go after people that don't pay, so they must pass the costs on to the rest of us -- that's estimated to be up to 15% of healthcare spending (figure $480B alone).

All this stuff is much harder to account for, because these corrupt policies infect everything: every utility bill has subsidies for low-income folks, and just about every license or thing that government does has exclusions for low-income folks, or the true costs of transfers of wealth would be much higher.

If you're a rube and you listen to the Democratic Socialists, you think that 57% of our budget goes to military and 1% goes to food-stamps and helping the poor... and the dirty, evil, greedy republicans want to cut food stamps.

If you have a clue, then you know better. Something like $360B (11%) goes to non-people military spending . And around $3,200B (47%) goes to social safety nets and programs, not counting all the private charities and contributions, or various off-book flim flam taxes and regulations like rent controls or other things that come out of the economy and are invisible taxes. (Figure at least another $1T). So the truth is our military budget is about 8% or 1/11th the size of our Social spending.... and while military budgets have been falling over the years (as a percent of GDP), Social spending has only been growing.

So there's the truth, and there's the Democrats version of the truth. And you need to pick which world you want to live in. The Democrats world of lies, dishonesty, and where everyone that disagrees with them is cruel folks that hate the poor.. Or do you want to live in the real world, where facts matter, and where we're spending more on Social Programs, now than ever before, and it is bankrupting the nation, stealing opportunities away from our children, and some people want to address it, and others want to lie for their agenda.

50 years ago Dwight D. Eisenhower (Ike) warned us about an iron triangle (government conspiring with politicians and special interests to work against the public), and coined the term "the Military Industrial Complex". Since then the military has fallen to 1/4th the spending it was, and the Poverty Industrial Complex (Social Spending) has become 8x larger, and far surpassed military spending. The warning still applies, just what the bigger threat is has changed.