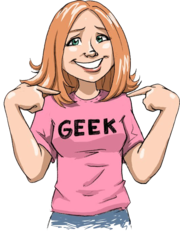 Why are there so few female geeks? Sexism is a part of life.

Some who don't know me might call me a sexist pig. Not because I think one gender is better than the other, I just think everything in life is about tradeoffs. Genders are not better or worse, but there are differences. I don't just mean different as in input vs. output, or physical differences, I mean that we are fundamentally different in how we behave, what motivates us, how we think, as well as how our environment effects (and changes) us. This helps explain why there are so few Female Geeks.

To understand people and genders, and what their fundamental goals are, you should observe children. Really, adults are just mature children, with better facades - but the motives and behaviors are still lurking just under the surface.

This causes all sorts of interesting learning experiences later on in life (like in marriage), but I think these core behaviors are what cause geek syndrome.

A pubescent boy (or man), with few social skills, and a drive (focus) to do something -- and throw in some raging testosterone to supercharge those drives. What is a boy going to do? The answer is that it doesn't really matter -- but he will focus on it, and put ALL his energy into it. Some boys will get into Girls (figuratively or literally), basically because they can -- often becoming dogs (trying to conquest as many girls they can), or becoming obsessive about one. However, most boys (and many people) are social outcasts, in their own minds, to some degree (for one of a thousand reasons). They are likely to pick a hobby, and focus on that.

Boys have to focus their drives somewhere! Computers are a great and productive outlet for that. But it is the drive (focus), to the detriment of all else, that makes boys different from Girls.

Look, I know there are driven girls too, but they are just more rare and seldom go to the same extremes. But women have this balance thing. They can actually hold a deep an intimate conversation with their spouse or friend, at the same time that they are watching Oprah, cooking a meal, and keeping an eye on the kids. Try THAT with a guy watching a sports-game. I go insane when my wife expects me to do that. Women can have a job, and leave it at the office at 5:00 p.m. - and go home and have another life. Men are more likely to define themselves by what they do; and take it with them everywhere. Males are more likely to learn something for the sake of knowing; but are much less able (or interested) in doing more than one thing at a time.

Trends can be overridden, and many males can multitask, and many females can lose balance and become career or hobby fanatics, but they are trends (stereotypes) for reasons.

Cars as a metaphor for life

Look at the differences between cars in the lives of men and women.

Women see cars as a means. It is a tool for transportation, and little else. A way to get from point A to point B -- and maybe look good while doing it. You have someone fix it when it is broken, you enjoy it when you drive somewhere, and then you park it, and leave it behind.

Men (who get into cars) see the car as an ends (not just a means). The car is an anthropomorphism of everything that is him. Like a penis extension, it is the embodiment of his ego. He tweaks it, adorns it, plays with it, cares for it, drives it, and makes sure it is cooler or faster than anyone else's car. He learns about every part of it, for the sake of knowing. He competes with his friends over it. His persona is tied up in that interest. He often will relax by playing with his car (or driving), he will talk cars with his buddies. He will join car clubs, and build a circle of friends around the car (in extreme cases). His measurement of himself is often in that car, or his abilities, understanding, and shared interests about that car.

Now that obsession could be with motorcycles, sports, or computers -- that obsession is geek syndrome. It is influenced by testosterone, and it is also why there are few female geeks. Sure there are some, I've met and worked with a few. And I've also dealt with many competent women engineers. But generally the balance in women is their shortcoming when it comes to being a geek. Having other interest, and a life, all works against them.

When I talk to Women Engineers (of which there are still too damn few), it is far more common to find out that they may not even have a computer at home -- or if they do, that the computer will not HAVE to be the latest, hottest model on the block. (What's up with that?) In fact, they often don't spend all their spare time playing computer games, running web sites, or souping up their computer. Women have a security in themselves, stemming from the fact that they measure themselves as more than just their "job" or identity as a geek. Women often have social lives, have some sense of style (gasp), care about their appearance (can dress without mixing stripes and plaids), and can even interact with other human beings (who aren't geeks).

There is the really sexist observation that Women are still the "nesters" in our society (on average). Men are more likely to see their duty as the job (paycheck) -- and focus accordingly. As sexist as it is, Women are more likely to either quit their job to have kids, or stay home with them when they are sick, or take care of the house, and nurture and nest. We can say that men don't contribute as much, or slack their home and family duties (in some cases) for their career (or hobbies). But Women's having their priorities straight can work against them when compared to men in geekiness and drive. Sometimes pay is reflective of that phenomenon (and others).

Of course there are many other contributing factors. Many girls veer away from math and logic studies early on -- because they find it disinteresting, and society encourages that disinterest in our girls. Even when Women do get into Computers or Engineering, they are often more likely to seek careers in the more social areas (management, sales, marketing, QA, teaching, and so on). So Women are often not encouraged, and not prepared to become geeks. The drive to solve puzzles just because they are there, the blind focus to the detriment of everything else in their lives, the competition of learning something for the sake of being able to "one up" your friends -- it is just not "natural" for most Women.

So basically the differences between men and women socially, are what makes the biggest differences in the computer world. More men put things ahead of people: the computer (and their knowledge of it) is their identity (of sorts). So men read computer books for the sake of knowing. They soup up their computers because they can. They learn how to configure machines for the sake of knowledge (not just to solve a problem). They play games for the conquest, and program for the conquest of the problems. They confuse ego (self) and machine (and knowledge of it) -- and this drive turns them into geeks. I know, because I am a perpetually recovering geek.

While I love and admire Women, one of the things I love about them, is most can have a life outside of their hobby or focus du jour. That may make them better people, but it does mean that fewer of them will become full-on geeks.