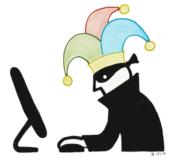 I tend not to think in the world as black and white, where big issues are absolutely right or wrong, good or bad. Most people are trying to do the right thing, and selectively looking at evidence to support their view (with the best of intentions). In MOST cases there are grays and enough ambiguity that people can disagree without them being asshats (fool or a fraud) just because we draw the lines differently. For example:

But I realize some people might disagree with me. And I think people should have that room to disagree with each other, and cut each other some slack. We don't agree, probably won't, and are applying different life experiences. But just because they're wrong doesn't mean I need capitulation from them. I love them anyways, and it's just a difference of opinion.

Unless it is black and white

Changing examples we know that:

Denmark (the happiest place on earth), and Japan (the most gun restricted) both have higher suicide rates than gun-crazy U.S., as do at least 50 other countries (most with gun control). So despite dozens of studies on the topic (and liberals/progressives hunting for decades for an excuse to take people's liberty away), there's never been good/definitive evidence that gun access increase suicide rates in any meaningful way, and quite a bit that implies it does not.

Thus anyone who has studied the topic, at all, would know adding in suicides to "gun violence" is committing a lie or being incompetent. Either they know the basic facts and are misleading people for their agenda (they're a fraud as an honest person). Or they don't know that, and they're a fool (ignorant of the basics on the topic they're discussing). It's a real dichotomy, not a false one. I've found no one that can find a reasonable answer that isn't on that black (ignorant) or white (intentionally deceptive) spectrum.

Now, I'm not close-minded. If anyone can show me evidence that contradicts everything I've read on it, for 30+ years, and start showing significant correlations that hold up to scrutiny, then sure, I'll give them some room and reconsider. But for 30+ years debating this topic, no one has been able to back up the claim that guns increase suicide rates.

That doesn't mean I think they're a fool in other aspects of their life. They might be geniuses for all I know. So I'm not saying they're a fool in general, but all I know is on that one issue, they're presenting a lie either knowingly or through willful ignorance. And being a fool is giving them the benefit of the doubt over the worse assumption: that they're just a dishonest person that would lie / omit basic facts, to win an argument on the Internet. What kind of duplicitous egomaniac would do that? So, "never attribute to malice, that which can more easily be explained by incompetence".

If someone can know (and should know -- like a politician on their pet issue), either: they're ignorant of the topic, or intentionally misleading others for personal/political gains. And I have contempt for that kind of person, and take great sport in embarrassing them publicly. Not because I care about being wrong in public. Heck, I value learning something new (and getting to be right in the future), far more than a moment of embarrassment by being corrected. But since the truth of them being wrong bugs them too much to learn, they deserve to have their noses rubbed in the mess, until they learn to not repeat that lie in the future.