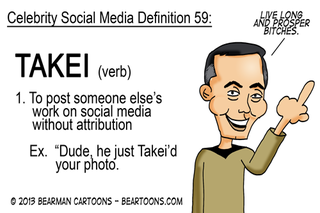 Look, I don't mind George, he's snarky, bitchy, catty, sometimes funny, and famous for being a b-rate actor in a b-rate series that went viral. But he's also a liberal flaming hypocrite. Which is also fine... as long as people admit it and own it, and stop treating his wisdom as anything but the rantings of another nasty hypocritical liberal guy (whether they think gays are funny or not).

I wish him the best in his film/movie/TV career and success in life), but him claiming moral outrage over things he does worse? He deserves to be article-buggered for it ("Oh my!"):

Just don't pretend moral outrage over conservatives doing less than you have, and I'll defend your free speech rights... which is more than he appears willing to do for people that he disagrees with. Play an over-the-top queer spokesperson, or play the moral one -- but you don't get to do both (depending on the person you're attacking's party affiliation). A little consistency is all I ask.

He went douchebag (again) on the Scalise shooting, and got some deserved backlash:

He also went full retard on comparing NFL protests and standing for the National Anthem with North Korea. 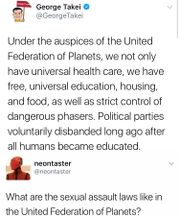 Takei got snotty towards the Dirtbag Harvey Weinstein, for abusing his power and fame [2] Then got caught doing the same. [3] Whether George was going Bill Cosby, or just taking advantage of a drunk friend, those in glass houses probably shouldn't throw stones. Instead of doing what he suggested of Harvey, and throwing himself on the mercy of the public, George offered emphatic denials. [4]

I kind of like George, when he's playing an over the top queer boy, making superficial social commentary from a fag-culture point of view (sticking to his roots). And I don't mean any of that derogatorily. It's like Milo Yiannopoulos doing the same, who I also kinda like. Just be true to yourself, whatever that self is, and it's fine. But keep some balance, and if you go full sanctimonious douchebag have the stones, integrity and squeeky clean history to back it up. Be consistent. Or at least fess up to past mistakes BEFORE getting caught. If all you are is a gay Asian Michael Moore, spouting progressive talking points, and the cute wears off pretty quick. If you're catty and hypocritical, and I tend to get more annoyed by the hypocritical to enjoy the catty any more. Be funny and light heated and don't take yourself seriously -- and we're good, even when you're occasionally disagreeing with me. But you can't mock your own side, or recognize your own flaws (or the same flaws in others in yourself or your side), then you're just annoying.

George being a classless douche: https://www.foxnews.com/entertainment/star-trek-george-takei-marco-rubio-allergic-reaction-coronavirus-vaccine