This is the mysterious opacity with which Google operates, they don't fully document the rules nor document how people didn't comply with the rules. They operate like a secret police: you know your relatives have been disappeared, but not what to do about it, and they feel no need to justify their action to the proles, and if you complain too loud, you might be disappeared as well. Why would anyone resent that? Examples include: 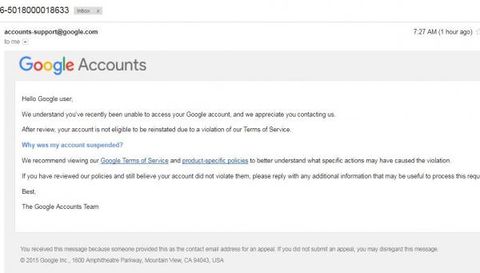 Companies have a right to enforce their terms of use, but they don't have a right to sell us on one thing (protectors of free speech and communication), then act another way. If they want to create clear policies, and live up to them, and show violations and warning paths before banning, fine. Shine the light on the dark corners of their secret policing. But as long as they have a masked hit squad, only tormenting their political foes, with no transparency or oversight, then I have more a problem with it.

Yes, they gave us services like "Free Email" in exchange for them getting to snoop our behaviors and sell those analytics or ads -- but the consumers invested time and money. And you don't get to destroy that value because of some clause in a term that they had no idea they were violating and no idea how to correct. When you think about how many people's lives are impacted by stuff like this, some have their entire livelihoods based on it, these are pretty dramatic disruptions.

When Google said, "Don't do evil", it helps to remember that making people (or their work product/livelihood) disappear, without explaining to them or anyone else why, no appeals, just ruination because some bureaucratic fascist (real or Digital script) deemed they were no longer worthy of existence, that's very progressive. And exactly what evil looks like.