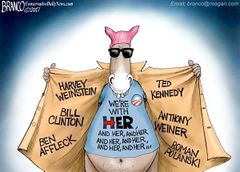 "Gropegate" is a completely overloaded term, since the most popular way to slander a political opponent in recent years, is to accuse them of sexual harassment.. then trounce out one or more Women with claims ranging from "he said something that they felt was to sexually forward", to "he used his position to intimidate me into sleeping with him", all the way to various kinds of rape to slur their integrity. Thus there is no "one" gropegate -- there's Clinton, Schwarzenegger, Trump ("grabbing pussy" comments on tape, or specifically one of the women on a plane that said he did it to her), everyone in Hollywood, the media, and all those that helped them. 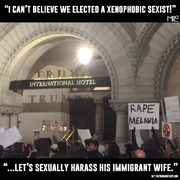 Hollywood and the Mainstream Media 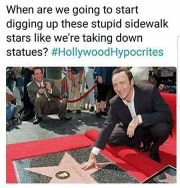 I feel like each person that does not name their harasser is a facilitator, as they're enabling the person to harass the next person without warning. 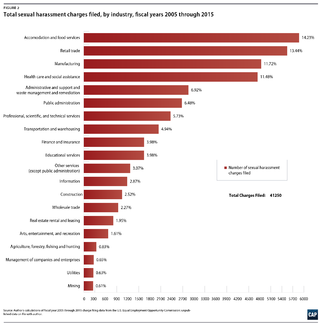 I don't like seeing anyone get hurt, but there's something delicious about watching sanctimonious hypocrites fall.

Here's a chart by VOX and Center for American Progress (far far left site, with a history of distortion), that does a breakdown of harassment claimss by job sector. [173] It shows "accommodation and food services industry", which includes restaurants, coffee shops, hotels as the worst. But remember, it's not:

So odds are, in the services industry, it's likely the public with an occasional drunk douche slapping a hostess or maid on the ass, which while "not acceptable behavior" in anyone's book, is not exactly to the level of a manager coercing sex under threat of unemployment. All of it is wrong. But there are degrees of wrong. So the chart is offered for completeness, though I'm not sure how much weight I'd give it.