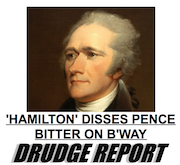 Mike Pence went to see the rap-musical about Alexander Hamilton. And was rewarded by the classless audience with boos, and by the less classy cast, with a call-out and civil lecture about how inclusive they all are, and welcome him to be (with bitten tongue snark implying that he/Trump are bigots). [1] The motto seems to be: never miss an opportunity to lower the bar, or whine when this gets reflected back.

Of course a divided nation, responded by being divided between those that understand tact and civility, and the rest. [2]

Many coastal's ignored decorum and sensitivity and claimed it was a perfectly civil sanctimonious lecture, so nothing was wrong at all. And they have a minor point, the lecture itself wasn’t rudely written, just the act of calling out an individual in the audience is rude. I explain it thusly:

And the context is that part of the reason the coastal elites lost the election, was because most of middle America found them crass and their complaints too shrill. They were tired of being called racists and bigots by the PC-gestapo for just wanting reasonable immigration controls, especially against threats like globalization taking away their jobs, and Islamic radical fundamentalists taking away folks lives. In response to that democratic scolding, the far-left had apoplexy exaggerating more everything about how bigoted Trump and his supporters are. Why I haven't seen Democrats this mad since the Republicans took away their slaves, or asked them to stop interning the Japanese.

Trump made it worse (as always), by demanding an apology on Twitter for his VP, but he’s the un-politically correct President. And his actions were in response to classlessness, so he gets a buy, since it was in retaliation for an insult, instead of an unprovoked attack in the wrong venue. And what he said wasn't wrong.

While Pence took the higher road, with claims that he “wasn’t offended”... of course that’s all a politician can do without looking petty/thin skinned. So Pence was forced into an awkward corner by the rude cast. [8]

The irony around Hamilton and Democrats behaving badly, is that actions have consequences. And if mocking people for saying things you don’t like is OK, then let’s mock their blindness and stupidity.

Here's some reminders of the history that their play is really about:

Even Historians, which tend to lean left to far left, are irked that the play miseducates the masses on who Hamilton was, and what he believed -- showing that the left's attempts to rewrite history can go too far, for even some reasonable lefties. [11]

Then there’s the meme’s that sum things up:

If you’re trying to get the new party in power to be inclusive and compromising, you might start by being gracious losers, instead of sanctimonious lecturers, and projecting your own poor sportsmanship on them, when they come to see a play to show unity.

Once one side behaves poorly, and heckles the audience, then why shouldn’t the audience be rude and heckle the stage back? And that's exactly what happened.[12] Isn't it great when both sides follow the lead of the Democrats towards politicization and divisiveness?

So while the stage idiots claimed they wanted inclusiveness and unification, if you can think of cause and effect, the truth was they worked towards the opposite, whether they were bright enough to recognize it or not.[13]

I don't buy a football ticket for the athletes (entertainers) to ram their moronic political interests down my throat. Nor did I buy a play ticket with the expectation that they'd single me out as a viewer for heckling, under the false flag of "caring about diversity" from a hypocritica,l misgynist, bigoted cast. So if they want to protest, that's fine. If they want to be the waitress that lectures me on my dinner choice (for picking veal: which is really none of her f'in business), then a restaurant that valued their patrons and would fire their asses. Fortunately, for the actors, the owners don't have that level of class or caring. But whatever backlash they get, protests, interruptions, heckling, or boycotts, is what they asked for by turning a simple evening of entertainment, into yet another way we can’t escape stupid liberals and their sanctimonious hypocrisy.