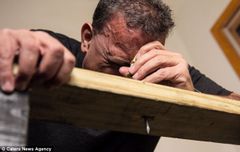 Hammers and Computers, what might the correlation be? Here is a classic tale from the old Internet archives (I think it goes back to BBS's actually) ... a story most Mac users are familiar with. This story was written during the early days of Macs (and DOS). But it applies to more than just early platform wars, and what was better Mac or Windows (DOS), it's about people who can learn, versus people who choose not to.

As I was walking down the street the other day, I noticed a man working on his house. He seemed to be having a lot of trouble. As I came closer, I saw that he was trying to pound a nail into a board by a window --- with his forehead.

He seemed to be in a great deal of pain.

This made me feel very bad, watching him suffer so much just to fix his window pane.

He stopped pounding his head on the nail and with blood streaming down his face said, "What?"

I said, "There is a better way to pound that nail. You can use a hammer."

I said "A hammer. It's a heavy piece of metal on a stick. You can use it to pound the nail. It's faster and it doesn't hurt when you use it."

"That's right. If you get one I can show you how to use it and you'll be amazed how much easier it will make your job."

Somewhat bewildered he said, "I think I have seen hammers, but I thought they were just toys for kids."

"Well, I suppose kids could play with hammers, but I think what you saw were brightly colored plastic hammers. They look a bit like real hammers, but they are much cheaper and don't really do anything," I explained.

"Oh," he said. Then went on, "But hammers are more expensive than using my forehead. I don't want to spend the money for a hammer."

Now somewhat frustrated I said, "But in the long run the hammer would pay for itself because you would spend more time pounding nails and less time treating head wounds."

"Oh," he said. "But I can't do as much with a hammer as I can with my forehead," he said with conviction.

Exasperated, I went on. "Well, I'm not quite sure what else you've been using your forehead for, but hammers are marvelously useful tools. You can pound nails, pull nails, pry apart boards. In fact every day people like you seem to be finding new ways to use hammers. And I'm sure a hammer would do all these things much better than your forehead."

"But why should I start using a hammer? All my friends pound nails with their foreheads too. If there were a better way to do it I'm sure one of them would have told me," he countered.

Now he had caught me off guard. "Perhaps they are all thinking the same thing," I suggested. "You could be the first one to discover this new way to do things," I said with enthusiasm.

With a skeptical look in his bloodstained eye he said, "Look, some of my friends are professional carpenters. You can't tell me they don't know the best way to pound nails."

"Well, even professionals become set in their ways and resist change."

Then in a frustrated yell I continued, "I mean, come on! You can't just sit there and try to convince me that using your forehead to pound nails is better than using a hammer!"

Now quite angry he yelled back, "Hey listen buddy, I've been pounding nails with my forehead for many years now. Sure, it was painful at first but now it's second nature to me. Besides, all my friends do it this way and the only people I've ever seen using hammers were little kids. So take your stupid little children's toys and get the hell off my property."

Stunned, I started to step back. I nearly tripped over a large box of head bandages. I noticed a cheap looking price tag on the box and a "clone unknown" logo on the price tag. I had seen all I needed to see.

This man had somehow been brainwashed, probably by the bandage company, and was beyond help. Hell, let him bleed, I thought. People like that deserve to bleed to death.

I walked along, happy that I owned not one but three hammers at home. I used them every day at school and I use them now evey day at work and I love them. A sharp pain hit my stomach as I recalled the days before I used hammers, but I reconciled myself with the thought that tonight at the hammer users club meeting I could talk to all my friends about their hammers. We will make jokes about all the idiots we know that don't have hammers and discuss whether we should spend all of our money buying the fancy new hammers that just came out.

Then when I get home, like every night, I will sit up and use one of my hammers until very late when I finally fall asleep. In the morning I will wake up ready to go out into the world proclaiming to all non-hammer users how they too could become an expert hammer user like me.

This was an old Internet Archive thing, it was old in 2001 when I first captured it. But I like it, because it made me wonder how many head-pounders will call the hammer users anachronistic zelots, because they won't modernize and start pounding nails with their fists -- just like everyone else does?!