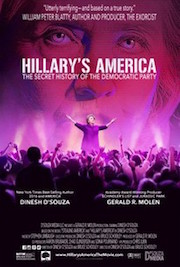 Now there are degrees of propaganda. There is dark propaganda like Michael Moore or Al Gore does, out of context quotes, lies of omission, distortion, fabrication, and so on. And then there's light propaganda, which is telling the truth, but definitely selling your side of the story. This was definitely in the latter camp, far less distortions than the average TV Expose or sitcom's agenda, but a well paced movie requires moving quickly and not exactly stressing counter-points and counter-factuals as much as one needs to. You get a mile high view of the scenery, but not exactly all the details. And this film covered a LOT of turf.

It felt like Dinesh had sold the backers on the idea of a film about Hillary in an election year, but made the movie he wanted to make, which was much broader (about where Democratic Party comes from), to remind voters of not only who they're voting for when they vote for Hillary, but what they're voting for when they pull the lever for a candidate with (D) after their name.

Of course lefty reviewers (but I repeat myself) hated it, and since almost all reviewers seem to lean far left, this was pretty much all of them. It's almost like most conservatives have better aspirations than eating popcorn and writing about movies they watched. But I'm single-handedly trying to prove them wrong (even if I am more libertarian than conservative). This was one of the widest spreads between reviewers and viewers with the former giving it a 4% approval, and audiences giving it 81% approval. I guess these reviewers either aren't very popular, or don't care what others think -- either makes them bad at their job.

At least the National Review liked it (more or less):

It starts explaining how Dinesh was railroaded by the Obama administration to get him back for his book/movie. I'm not a conspiracy theorist, but the administration did get caught using weaponizing the IRS, and they got caught framing a producer for the Benghazi attacks, and Dinesh is the only person in recorded history to ever go to prison for first offense of over-donating to a friends political campaign (without the donee even knowing about it). So if the tinfoil hat fits, you wear it.

The premise is he learns in prison how confidence scams work, then proceeds to map out the History of the Big Con: how the Democrats rewrote history and most people (especially their base) have no idea their party was founded on Andew Jackson: a brutal democrat that was vicious to his slaves (that he raped) and who created the trail of tears. Through Lincoln (the great Republican), and how Democrats created the KKK and Jim Crow laws to oppose the civil rights acts of the late 1800's, through Wilson and segregation of government, Margaret Sanger's Eugenics, FDR and Johnson racism. And so on. Then the big con is the Dixicrat Switch lie: where there was supposed to be this magical flip where all the racist lifelong Democrats switched parties, even though only 1% of the actual representatives switched. Ironically, he ignores and kind of half concedes the stronger point that the voters didn't switch in 1968, 1972, 1976, 1980, 1988, 1992 -- and it really wasn't until the late 90's and early 2000's that you started seeing Republicans taking the south. Nor would it make sense for the racist lifelong Democrats to move from the party that reluctantly gave us the civil rights act of 1964, to the party that voted for it in even higher numbers than the Democrats, and broke the Democrat filibusters.

Then finally, around 20 minutes from the end, it wanders into Hillary's lifetime. Sprints through Saul Alinsky with his shady background (the kind of sociopathic asshole that was her mentor and role model), goes through Hillary and Bill, and a fraction of the scandals that covered their political lives: focusing mostly on their whoring, either Bill's for broads, and Hillary's for power and both for money (selling the services of the State Dept. for speaking fees), as well some love and attention over where the hundreds of millions targeted for Haitian relief wandered off to.

He did a lot more on the Clinton foundation than I did, but I covered far more on Hillary in general here: Hillary Clinton.

Basically the movie was the dark history of racism in the Democrat party, with a little special attention to what the Clinton White House would return us to.

The movie is fairly entertaining, but heavy handed. The end summarizes the feeling of the movie: a choir and an orchestra playing the Star Spangled Banner and God Bless America, to American Scenery, Jets flying over, Dinesh silhouetted against sunset sky.

The haters will wave it off as two mutually exclusive things:

Some (like Lois Black) say imply with a straight face that accusing Democrats of being un-American Racists is un-American -- then totally miss the irony that that's the whole Democrats platform is to claim that Trump's views on Immigration, or anything Republicans do is un-American and racist. But alas, Lois missed his own irony.

In the end, my review fits his other films: informative rehashes, entertaining but a bit slow in parts, a few things I didn't know (or at least aspects to explore), yet still missed a few other things I wanted him to cover. Not a waste of my $9.00 and worth seeing for those that want to take mental notes and look up some of it later. But when given the choice between uncomfortable truth or comforting lies, humans lean heavily towards the latter.

This news is subdued, but like Dinesh's other films, this became a top grossing documentary (so far this year), that the public will never hear about. While better shot, more accurate and more interesting that anything by Michael Moore or Al Gore, the Press will demonstrate bias by not drawing any attention to the film. And Hollywood will demonstrate their bias by not giving it any awards or recognition.