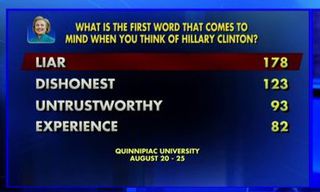 There's all the scandals that she got caught lying in (after accusing the other side of lying). And there are many more stories of her being an angry shrew that yelled a lot, and threw things, and the Whitehouse staff didn't like her, at all. (These stories kept coming out). In polls, more people believe in Bigfoot (14%) than Hillary being honest (11%). (Really). While I don't mind a tough-minded President or candidate (or even a "bitchy" one, at times), there's a difference between occasionally coming down on people, and just being nasty to be around or a bully. Many close to her tell the same story about her being nasty, bully, corrupt and a liar. Books have been written calling her, 'the Lady Macbeth of Little Rock", her household cook in Littlerock said, "The devil’s in that woman". While anecdotes aren't proof, when there are so many, over so many years, you have to be an idiot (or partisan) to assume that they're ALL false. Is everyone out to get this poor innocent altruist saint? Even Snopes has to admit it's at least partly true, though they focus on the little stuff to distract from the bigger picture. 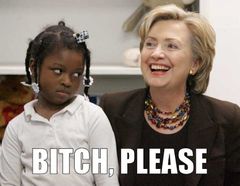 There are many quotes attributed to her about what a rude/foul being she can be. Like some of the following, and even left leaning snopes has to admit that they've appeared in print and been attributed to her from many different sources. Either they're all lying, or what people close to her remember is how foul she is. 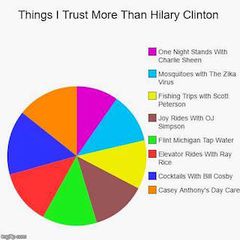 Anecdotes aren't proof, but they do hint at patterns (and can tell you where to look). My wife is a flight attendant whose Mom worked with the State department a lot, and has many stories about how much they hated working with her administration. As a flight attendant, my wife flew with a few Secret Service agents who had been on Hillary's detail during the Clinton administration, and in their discussion she asked about this -- they're diplomatic in response, but the take-away was all his other assignments were better experiences. Everyone who worked around her, has a Hillary story. There's just something about her, that most seem to detest, and that's not something you want in your commander in chief or top diplomat.[1]

Then there's history of lies. Little ones and big ones.