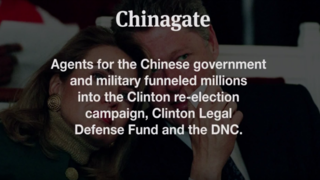 The Clinton-Gore campaign in 1996 allegedly took bribes from Chinese banks and their government (to help their dwindling poll numbers). The Chinese embassy siphon funds into the DNC with the help of Secretary of Commerce Ron Brown (died in a plane crash), and at Hillary’s instruction, reportedly sold seats on department trade missions to China. The Democrats and DOJ "willfully impeded" the investigation according to the FBI Director and other agents who later testified before Congress.

The Democrats counter-attacked on Republican campaign improprieties, and by the time this investigation was kicking in, the Lewinsky scandal heated up and distracted everyone, so the investigation was kind of dropped (or drowned out) and we never got the full story or investigation or outrage at the obstruction. Judicial Watch founder Larry Klayman continued his investigation, even though the formal one was shut down:

In the end, since the Clintons were never fully prosecuted or excoriated by the Press/Public, this idea of selling foreign favors for money, was scaled up, converted into a charity and became the Clinton Foundation,.