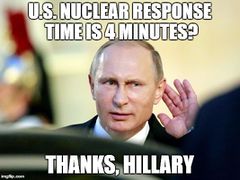 Amongst the top most classifications are Special Access Program (SAP) and the “need-to-know” (NTK) classification that includes only a few top cabinet officials like the Secretary of State. These contain things like the nuclear response times, that have been completely classified and foreign enemies would always have to make educated guesses on how fast we could possibly get missiles in the air. Not any more. Thanks to Hillary trying to win political points, she blurted out one of the nations highest secrets ("There’s about four minutes between the order being given and the people responsible for launching nuclear weapons to do so”). And the results are that many security officials and the Pentagon are once again pissed at her incompetence with classified information. (Not to mention the whole emailgate thing.

Does this really matter? Probably not much. They could approximate and guess at the time, it's just nice to have hard confirmation of your intelligence. But this was a far bigger deal than anything Trump has done wrt talking to the Russians about cooperating on terror, and mentioning what the newspapers had already published about how terrorists were trying to create laptop-bombs to target airplanes -- and they made a huge deal out of the latter, to gaslight anyone who knew better. So if that's our standard of guilt, then Hillary should be in Leavenworth. (I've yet to find a standard of behavior applied to Trump that doesn't make Hillary worse). Pick one standard.

There's a bigger point to the presses duplicity in all this. The President by law and nature of his office is allowed to classify and de-classify anything he wants. A candidate for the President (as Hillary was), may not. Do you think any of the Press complaining about the Donald's actions (while ignoring Hillary's prior worse slip) did journalism and brought this up? If you find one, let me know.