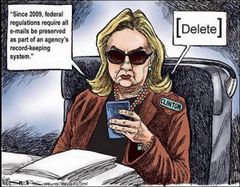 After criticizing Bush and Secretary State Colin Powell for using a public email service while in office (they were using the separate emails for campaign communication, because the law implied they were not supposed to be using federal machines for that), and after she was warned by Congress in 2012 against using a private email account for government business, after Petraeus got fired for handling secure documents in a less than perfect way, instead of using the government-mandated process/servers, Hillary chose to setup her own private email, left it unsecured[1], deleted 30,000 emails without any auditing, said she gave all job pertinent emails to state, it illegally had top secret emails on it, she claimed she set it up only for the convenience of not carrying two devices, and so on. We know she lied about every one of those claims. All of which were crimes or violations of agreements. Yet, apologists persist to this day in implying she did nothing wrong (or at least criminally wrong). That's demonstrably false.

Guilty. Period. You can't delete a single email without being a criminal, let alone FBI director said thousands. More than that, she claimed the only thing she removed were things about yoga, wedding stuff, and personal things to Bill. (Bill and witnesses claims he never uses email). Then it turns out later that the reason the FBI wasn’t able to recover emails from those servers directly (they got them from people she’d sent them to), was because they used a 3rd party application to scrub and overwrite every file that was deleted. That's intent. This wasn't, "oops, I pressed delete" -- this was I went out and bought software to destroy evidence. You don’t use a super-secure delete utility for removing yoga emails, you only use something like that for things you REALLY don’t want the world to see. [3] And if there was any doubt, you had wikileaks showing Hillary and Podesta conspiring to remove the emails because they knew they would be problematic.[4] That's intent. 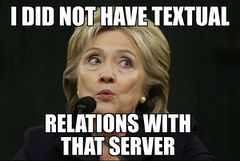 The FBI managed to interview her (sit and have Tea with her) on Saturday, and come a predetermined decision by Tues (over a Holiday weekend), that

Different law for the Clinton's 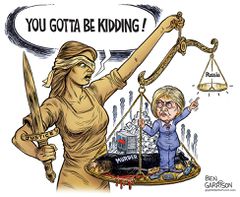 Remember the basics -- the FBI / James Comey and his cabal of far left agents, wrote an exoneration letter BEFORE interviewing her or her staff, then rewrote it and edited it to make it look less criminal (despite it meeting the standards for a crime), had given most of her staff immunity to make sure there was no pressure to tell the truth, didn't put Hillary under oath, broke procedure by not taping the interview (or destroying it). Then they panicked when more emails came out on Anthony Weiner's laptop (an obvious second crime), then exonerated her after a 12 hours of review. What do we know of that?

How others are treated