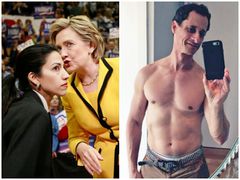 Of course few think that Hillary is directly responsible for Huma and Carlos Danger's clusterfuck of a relationship. On the other hand, if the left is fond of trudging up the rare scumbag with distant associations to a Republican Administration (like they love to do), then the goose-gander rules apply. Hillary's closest confidant ("second daughter") is a lot closer to shit-shows than President Tangerine. So pick a standard and let's all live by it. We know that Huma violated ethics by tripple dipping (and Hillary administration had said it was OK). We know that Huma was destroying public property, with Hillary's approval. And we know she lied about both. Let's see, liar that was breaking laws to keep Hillary from being held accountable: like a Daughter to her indeed.

Huma Abedin was getting overpaid by nearly $10,000 by state (called Humagate), while also getting paid by the Clinton Foundation AND working for Teneo, a consulting firm run by Bill Clinton’s former right-hand man. Major conflicts of Interest by her closest confidants, again. [1]

Huma just happened to have be a member of the executive board for the Muslim Student Association, which was know for being a Muslim Brotherhood front group, with family ties to al-Qaida financiers (when he mom worked for Muslim World League). Abedin just happened to have an account on Hillary's private email server. So is caught up in all of emailgate (including sending/receiving secure emails, and forwarding a few to her Husband the Perv).

Again, the point is that if Trump hiring a guy that once talked to the Russians is a major scandal, then your aid having 3 family members with terrorist ties, and violating national security, is a scandal as well. And Hillary calling Huma her second daughter, and Huma calling Hillary her mentor and mother figure, tells you that these two are far more coupled (in scandals as well as everything else), than Trump and his son-in-law.

Hillary burned her daily schedule to keep it out of the public record. That's destruction of public property, likely to coverup other questionable behaviors. And if Huma watched it happen and didn't report it, that's a conspiracy. But to the water-carriers, she can do no wrong. Lesser government workers would lose their jobs for covering up their activities like this.[2]