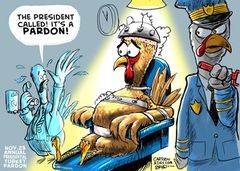 Most Presidents pardon people over the course of their Presidencies. Clinton waited until his last day in office then pardoned 140 corrupt Democrat/Clinton Supporters (456 commuted in total). Again, it's not just that the scale is beyond whatever we've seen before, but it's the scope -- that there were so many blatant conflicts of interest. These weren't ambiguous "maybe they weren't guilty" types, it was basically if you donated to Democrats/Clinton's, or were radical lefties, then your crimes were forgiven.

You can go through some of the rest on your own, but it was quite a cast of characters, and while there were one or two pardons that raised eyebrows in the past (Ford's Nixon pardon comes to mind), no one does questionable choices like the Clintons.

Thanks to the Clinton standards of justice, it means that Republicans can pardon virtually anyone and just use the goose-grander coefficient. The nation standards were lowered, like everything the Clinton's did... and the Clinton apologists just don't care.