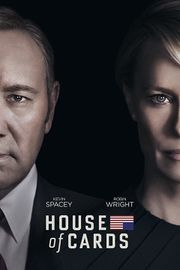 I finished House of Cards: the Breaking Bad of Politics. And I don't mean that in a good way. I grew to hate all the characters on Breaking Bad, but I started out hating them on HoC. They don't get more likable.

Francis Underwood is a politician that will do anything to get what he wants, and he has his wife Clair by his side (who seems just as ruthless a collaborator). Together they manipulate their way to the top. And while you kind of like their charm, you can't like what they do.

Season 1 was his climb to power as a dirty ruthless politician. And for once, Hollywood didn't play off the Democrats as the pure good guys and the republicans as the bad. So I had hope that this wasn't the usual dreck. It was more about the scheming and complexity of politics: how in bed with lobbyists and big money politicians are, while exuding a personal charm that sways you to their side (and their deep schemes screw you over). They subtly (or not) manipulate people, pit them against each other, and make sure most wrongdoing is pinned on someone else. Hey, I grew up with an Italian Grandmother, I've watched these games my whole life.

So you get the impression that there will be some fairness and complexity in the topics (refreshing). Which holds true through Season 2. They are not "good", just politicians scheming to get power and title, interspersed with Kevin Spacey occasionally talking into the camera to share his wisdom and witticisms with you (and to bond you to the anti-villain). While still keeping a lot of him and Clair an enigma.

But by Season 3, it goes back to cookie cutter liberal dogma, and makes the first 26 hours of the show seem like a waste of time. (Did they change writers, or was this their intent of the arc all along?) Frank and Clair become an obviously an amalgam of every leftist cliché you could imagine, and then some. Bill and Hillary intermixed with Barack Obama. All the bad he did, was just to do big/good things. He needs to become the FDR of the 21st century (while quoting freely from him) in order to create the ultimate jobs programs. And he has to ignore the law because of an obstructionist congress that won't give him funds. He has to lie to the American people, because they're too stupid to understand the complexities of his decisions. It's all for our own good. And so on. It would sound like an Obama campaign speech, if he was capable of telling the truth.

So it devolved from a story on personal relationships, moral ambiguity and political complexity, into a lecture about how good guys have to do bad things in order to create great things — like the WPA. Then I’m reminded of the Lious Armstrong and Mills Brothers WPA song, "Sleep while you work, while you rest, while you play... Lean on your shovel to pass the time away”.

Look, if I watched TV for that kind of igno-rhetoric, I'd just turn on Jon Stewart or MSNBC.

I was thinking of the obvious and openly admitted efforts by Normal Lear, to brainwash the audience by playing off the bad conservatives Archie Bunker (All in the Family) and Alex P. Keaton (in Family Ties) as the heavies and villains. While the good liberals (Rob Reiner and Alex's Parents) were going to be the lovable hero's of the show. Only to prove how out-of-touch Hollywood producers are, they had it backfire, and the shows success hinged on the wrong characters. This starts to get that same feeling.

And how could the efforts not fail? Liberal dogma, and centralized "government knows best” herd-think, being force-fed to us via sit-com, just isn't that funny. And the humor is in the true counter-culture (speaking truth to power), which is in mocking the politically correct conformity demanded by the hippies and lefties. This was all summed up in the book, "Primetime Propaganda: The True Hollywood Story of How the Left Took Over Your TV".

I’ll attribute it to great minds thinking alike — but while writing and researching parts of this, I found that Nick Gillespi review had beat me to the punch on most of my points, so now my review seems like a rehash. Thanks Nick: http://www.thedailybeast.com/articles/2015/03/07/that-s-it-house-of-cards-you-lost-me.html

But the point is that House of Cards season 3 started trying to hit all the Hollywood notes. Good people like Frank and Clair can cheat on each other, marriages are complex. Good people have to do bad things. If you don't try to teach the rural hicks that this stuff is OK, then how will the Democrats get their future voters? So it shifted from a storyline about amoral politicians, to sitting in class while your Birkenstocks and ponytail wearing 80 year old political science professor lectures you for 13 hours on the greatness of FDR.

While there are nuggets of truth in that, I think that sentiment was too cynical, even for me. And I don't completely buy it, because Carter wasn’t that honest. But at least it was more interesting to watch Nixon for season 1 and 2, than Season 3 being a giant set of excuses for why Barack Obama and Bill and Hill can be excused for not being Jimmy Carter.

I don't need my morality lessons given in suppository form from Hollywood TV Shows. Just make the characters interesting and give me a storyline without the far left rhetoric and we’re good. House of Cards HAD to get specific to follow their own story line, but it’s too easy to get lost in their dogmatic details for it to be entertaining any more. I finished it to see if it got any better and where the arc went, but it managed to slink under the bar I laid on the ground once they started talking about "America Works".

Season 4 was a bit of a redemption compared to Season 3. There's running for office, manipulations, and some conspiratorial sabotage. I don't like the characters, but at least this was more true to the story line that a DNC propaganda piece about how good people have to do bad things to get good laws passed. (Even if the people doing them aren't that good and they only reason they passed them is for personal gain).

Season 5 is meh. The storyline is somewhat OK -- but it's trying to be too current and play off Trump's election ambiguity (or at least GHWB's). The characters are getting tired, not because they're evolving but because they don't. Seeing vile D.C. types being corrupt is annoying when set within the divisive tone between the media and our nation during this season. So in another time, it might be interesting and comical. But when you're neck deep in bullshit, watching it on T.V. has far less appeal.

I'm still not sure of the show. I watch it more to be up on the cooler conversations than really liking the story or the plot. But I suffered through all seasons of Breaking Bad for the same reasons. I wanted to see the story arc end.