Dreamworks animated viking saga that I would recommend to people who like animated kid friendly movies, that can also appeal to adult. Very visually interesting, with somewhat simplistic plots, but well enough done story lines to just the time and price. 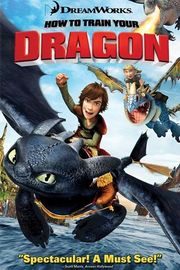 The teenage son of a Viking chief (Hiccup), who is small and weak and likes to make sometimes backfiring mechanical devices, must kill a dragon in order to mark his passage into manhood and prove his worthiness to the tribe. Instead once he captures "Toothless" (his night fury dragon), the two bond, become friends, and he shows the village a different way. It was somewhat predictable but very well done. It had comedy, touching moments, great action shots.

I really liked this film and would recommend it to anyone that wants to see an animated film, that's targeted for pre-teens (but might be a little intense as it gets younger), but is entertaining enough for older kids, or adults. Rotten Tomatoes gave it a 98/91, showing that it was really a stand out hit of the year by reviewers and audiences. 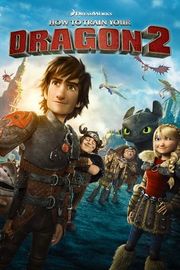 The second installment in the trilogy takes place five years after the first film, and the forever unsure now 20 year old Hiccup is being pressed to succeed his Dad as chieftain. Hiccup tries to reason with an unreasonable Dragon Trapper with visions of world domination (Drago Bludvist) and discovers Valka, his long lost mother (who becomes his ally). Big Dragons (called Bewilderbeast) are fighting to be the alpha and control all the other dragons, and Toothless (under control) kills Hiccup's Dad. Eventually, Hiccup helps Toothless break the spell (and vise versa), Toothless fights the Bewilderbeast to become alpha and drive off Drago, and Hiccup becomes chieftain of Berk.

Again the imagery, directing and story were all great. And it was another success in the series. Rotten Tomatoes gave it a 92/89, showing that it was widely liked by reviewers and audiences. 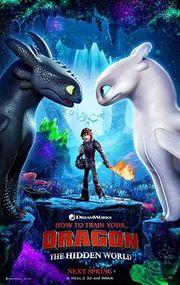 The third installment got the subheading "The Hidden World" instead of "3", and is kind of a tell. The human world and dragons are in continuous conflict, and Hiccup resorts to tales from his youth about a Hidden world that he believes must be a human-dragon utopia. After rescuing dragons from all over, the island is becoming severely overpopulated with dragons -- and they have the attention of everyone because of that.

The arch nemesis in this is Grimmel, who wants to use Toothless as the alpha to control all the dragons, and then kill the last of the night furies (aka Toothless)... and he uses a female white fury as a lure, or at least a distraction. Toothless is all agog and learning how to entice his skittish mate, and Hiccup realizes he's outclassed and a sitting duck, so takes the village and Dragons on a a trek for the hidden world. Before getting there, they get captured by Grimmel, and have the big escape/fight scene to save the dragons from enslavement and death.

They have also found the Hidden World, and realize that dragons will never be safe in the human world. So Hiccup bids a tearful farewell to Toothless as all of the Berkians set their dragons free to live in the Hidden World. There's a touching reunion with all of them having their children, and Hiccup vows that until humankind can co-exist peacefully with each other, the dragons will stay hidden as the Berkians guard their secret until the time comes when they will return in peace.

Rotten Tomatoes gave it a 92/89, showing that it was widely liked by reviewers and audiences. While I thought it was good, my wife thought it was OK.

Reason did a pretty good review that brings up some points on the last movie, which sort of sums up the series -- this one was a bit more kissy-face, and slower, with still fantastic animation and graphics. And while it wraps up the series in a very reasonable way, the sanctimony of the moral posturing with, "greedy humans," and Hiccup telling the dragons, "Our world doesn't deserve you yet", can be worthy of some eye-rolls and thinking, "that's the message you want to leave your kids with?" That humans are bad, and that's why we don't have dragons and nice things? It seems like less lefty and more imaginative writers could have had a better message and ended on a better note than that. But it is what it is, it did wrap up the series -- and they finished their franchise.