How does compression work? 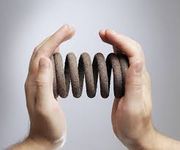 How does software Compression work? How do you make something smaller? In some ways you don't -- you just encode the data in a more efficient way. This article explains some basic concepts about data storage and compression: which are far simpler than people realize (it's just the implementation that can get some hairy math). Basically, compression is achieved by looking for commonality (in shape or pattern), and then saving that smaller description rather than saving the whole image. If you don't get it, read on, and it may become more clear.

Shape compression is usually used for images, but a sound wave can be represented as an image (waveform), and video is just a lot of images, shown quickly -- so these same concepts apply. Data is seldom random: there is some pattern if you look for it. So we can use that; instead of saving an image, you look for commonality in the image, and create a table of those common elements. Then you just save references (index into the table) of those common elements in a way such that the image can be recreated from its parts.

One simple form of shape compression would be to look at text. Lets look at a bitmap (binary pattern) for a font (typeface). If you look at an 'A', let's say it takes 8 x 8 dots to represent this character as a bitmap (image). If you made a picture of all the text on a page, it would be 8 bytes per character x 2,000 characters per page, and figure a few pages -- you're talking say 48K (48,000 bytes). An now days, each character has a lot more detail (and takes a lot more space) than the simple font I used.

Instead of saving the page as an image (or a bunch of images), what if we look for the commonality in shapes. We know that an 'A' will look like all other 'A's. So instead of remembering a picture of the screen, we can remember all the characters and their order. Since remembering an 'A' as a character, takes a lot less space than a picture of an 'A', we end up with a file that's about 1/8th the size, using my little font. In modern fonts and graphics, it's more like 1/50th the size.

This is an efficient form of shape compression. Since our characters are standardized, it is pretty easy to do. We just looked for common shapes (each letter), and figured out a way to describe those shapes (using a table), and then we only remembered an index to table (instead of remembering the shape itself). This compression works great as long as what is being encoded is a standard shape. It gets trickier, or impossible, if it is not.

Note: I have the image zoomed in (so we can see the data), and the image in its actual size is to the right of the zoomed image.

Images themselves are often called "raw data", and can take a lot of space. These are also called Pictures, Icons, bitmaps, pixmaps, and so on. Lets look at the following image.

What if we encoded the data as the shapes themselves? We could save a simple set of tables that would have information about each shape including:

Using our shape tables we could draw that same picture with 3 shapes:

So it took us just 60 bits, or less than 8 bytes, to encode the same image using illustration or drawing techniques (shape encoding) -- as compared to 256 bytes to encode the raw pixel data. So drawing (in this case) was 32 times more efficient (32:1 compression).

But this is only the beginning.

Lets make the image 16 times larger (256 x 256 pixels). It would take 64K (Kilobytes) to encode the raw image, while it would only take about 14 Bytes to encode the drawing -- or better than 4,000:1 compression. So you can see that "drawing" or "illustration" is a far more effective way to encode data than bitmaps (or raw data). Of course the trick to drawing is to have enough shapes, colors and other variants, that the drawing data is useful and can display a variety of pictures (4).

The point is that shapes are a far more efficient way of encoding data than images (raw data). But this only works if you can break a problem (image) down into discrete shapes or illustrations -- drawing programs encode data efficiently, but the data has to be created with them in the first place. (It's very hard to reverse engineer a drawing). And if you put enough shapes and lines on the page, you can cross over and eventually get worse: it just takes a very, very complex drawing to get there. So there are many images that don't fit well into the "drawing" category. So there has to be other forms of compression (for image data).

When you can't compress data at the source (by describing the data by its parts or common elements), then you have to look for patterns in the data itself. This is usually not quite as efficient, but because of the details of many images, this is how most "pictures" have to be compressed.

Lets do a basic form of pattern compression.

Assuming this image is about 20 characters in size (with only letters in the first few positions). As text it would only take 3 characters (bytes) to encode (one for each letter F-A-X) -- but that only works if we know the font (know what the characters look like) before hand. If we don't know what the font looks like, then we have to go back to encoding the whole thing as an image. As a graphic it would take about 240 bytes to encode the image (1 bit for each pixel). That isn't very efficient. What if instead of encoding the commonality of shapes (characters), we encode based on commonality of the data pattern?

If we look for the commonality in the pattern and we notice there is a lot of white. Lets scan the image pixel by pixel in the same way we read a page of text (from upper left - traveling horizontally until the end of the line, then back to the start of the next line and across, until we get to the bottom right). Notice that there are long runs of white (before you bump into a black pixel). Let's use that.

Instead of encoding just the image as data, lets steal the high bit of a byte, and use that to define if the other 7 bits are going to be data, or a "run" of white (how many bits of white, up to 127+7, should follow).

At the start of our "run" we notice the first line is white. So we encode a byte with the high bit off (is white), and a run of white for 134 pixels. Then we need another byte (run) to do the same for the remaining 27 more pixels (to get to the start of the black pixel). The next three bytes are encoded as data (image). This is encoded a little less efficient, since we only have 7 bits per byte to use (since we use the high bit for whether it is a white run or not). So the data encodes about 13% less efficient for these bytes, but this is more than made up for by the added efficiency for white runs. So using our encoding, it took only 2 bytes to encode what took 20 bytes as an image -- so our way was 10 times more efficient. The longer the "runs" of white (uninterrupted white), the better the efficiency of our encoding (compression).

This whole technique is called, "Run Length Encoding" or RLE, since we are looking for "runs" (streams) of the same pattern. We could also get fancy and figure out how to encode runs of other patterns as well (like black or alternating bits, and so on), but you should get the idea.

By the way, this is basically how a fax machine works.

Of course, RLE can also be used to compress text, if the text you were encoding had long "runs" of a particular character. Otherwise there would be no real gains (and potential loss) in efficiency.

There are other ways to compress text as well.

Huffman : The most popular form of compression of text is Huffman encoding. Basically, the concept is still to look for more commonly used characters, and encode them using the fewest bits. The sacrifice is that infrequently used characters will take more bits to encode. But if you figure out (predict) the frequency well, you can get pretty good savings (2:1). On large amounts of text, that can be a lot of space.

The way variable size encoding works is to build a tree with many branches. The end of each branch contains a letter, and the shorter the branch, the smaller it is to encode. Here is a sample tree for the Alphabet:

This concept (common = smaller, complex = larger) goes back so far in history, that I wouldn't even want to guess where it started. But a few thousands years ago Chinese (and Western) writing used some of the same concepts. Many of the most common characters are the simplest to write (fewest strokes). They get simplified because people get tired of writing the complex characters all the time -so they "compress" their writing strokes. Another form of this concept might be using morse code. The most common letter in english is the 'e'. So in morse code, it is the quickest to send (a single "dit"). While an uncommonly used letter like 'q' is longer to send (da da dit da).

Lempel/Ziv : If you can variably encode (size), based on character commonality (frequency of occurrence), then when sending text you should be able to compress commonly used words as well. You just have to build tables of hundreds of common (but larger) words, and then send indexes into that table. (Not dissimilar to the Huffman Tree). These indexes are usually built dynamically, by looking into the data itself, then creating the table based on THAT text. Obviously, the fewer the repeats in the document, the less effective the compression.

Several variants of the L/Z algorithms have been patented, and they demand royalty fees to use. This caused much of the stir over Compuserve's GIF (Graphics Interchange Format) a few years back. Programmers were not thrilled to learn they were going to have to start paying royalties for something that people had known and used for decades.

Even though Huffman and L/Z are usually used to compress text, they same concepts can be applied to other structures like Graphics, Sounds or compound structures.

So there are many kinds of compression techniques.

Some other ones not mentioned:

And so on, we could go on. Just remember that all the compression techniques are doing the same basic thing -- they are finding common elements, and encoding the file in a smaller form by only having to remember references to those common parts -- and only saving those common parts once.