The friend of your friend may not be your friend. And an enemy of your enemy, may not be your enemy. Many people on the left, are of the opinion that because Trump is for ICE (Immigration and Customs Enforcement), or because ICE sometimes does bad things, that ICE must be bad. The truth is that they do a needed service, but some of the laws, regulations or policies they are required to follow are bad. But that's a problem with the policy, not with the organization. The alternative to ICE, is violence. Many media outlets totally FakeNewsed their stories on the organization/issue.

Since the left thinks small, and Trump agrees with ICE, and the left worked themselves up in a lather than Trump wants to create concentration camps for illegal aliens and separate parents and kids -- ICE must be bad. And must be abolished. All of them omitting what ICE actually does, which is prioritize who they are going after. Since they can't go after everyone, they focus on repeat felons and criminals, not Maria your cleaning lady, or Jose the field worker. But you wouldn't know that from the rabid left, or the media that is inciting them. [1]. They have supporters like Alexandria Ocasio-Cortez, the new star-child democratic socialist.[2] Since the WhiteHouse is against such insanity/stupidity, and says so, the Dems are becoming more for it. [3] 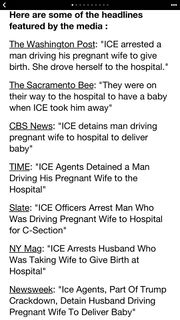 One of the great examples of media bias (and leftist self-delusion) is the case of ICE. They ran into an illegal alien, who was in the process of driving his pregnant wife to the hospital, and they arrested him. That triggered all the snowflakes on the left (and their media) into texting, tweeting, and Facebooking about what a great injustice this was. They seized upon some poor innocent illegal immigrant getting arrested for driving while brown, and left his pregnant wife had to drive herself to the Hospital to have a baby. And like most of the knee-jerk left's reactions, they got it all wrong -- and those that read the media became more outraged, and more ignorant of what had happened. (CNN, WaPo, SacBee, CBS, Time, Slate, NY Mag, Newsweek were all the epitome of this stupidity).

ICE wasn't trolling for illegals, they were trolling for felons and fugitives. The guy they arrested was wanted for murder in Mexico. ICE was protecting American by arresting a murder suspect. Period. End of story. The fact that he was illegal alien, or that his wife was driving in for a planned C-section, is just a distraction (not the story). Unless you're trying to troll for clicks, or outrage the perpetually gullible. [4]

Why do you suppose each of these news organizations decided to omit the fact the husband was wanted for murder in Mexico & ICE arrested him on an outstanding warrant?