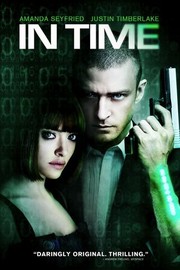 Watched this on HBO. Much better than I expected, but I had a low bar. It was trashed on Rotten Tomatoes (36/51). But I think you should go in expecting a bad Timberlake film, and then you'll be pleasantly surprised when you get a mediocre one.

A cliché'd plot and premise (oppressed poor fighting for minutes more of life, in a caste oriented future). Despite the not-subtle premise, there was more depth, character development, well done visual/directing and better acting for yet another robin hood meets the hydraulic empire type movie.

There's some holes. How does the willpower thing work to fight for each others time (or give it back and forth)? Not to mention genetic engineering luminous numbers on the arm and a heart that explodes at 0. And if it just takes electrical pulses to charge people's time (like the electronic time storage things), then why not charge everyone up? (Or counterfeit those pulses?) You needed to ignore the plot devices and just accept the alternate reality. If you can do that, it's not THAT bad. If you can't, it's really that bad.