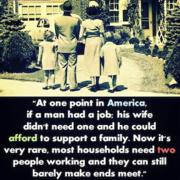 There’s a bunch of meme’s and soundbites going around where politicians love to point out the disappearing middle class (income inequality), and how we need them to fix it. There’s only a few problems with that:

Now there are a few exceptions:

So not everything is cheaper, but most things are. The few things that are more expensive are almost all the things that politicians “helped us” with: healthcare, education, social programs, taxes/regulations. If we hadn't "fixed them", they would have been much cheaper.

Just think about how much better things are. How well did parents in the 50’s really live?

Which is more likely to result in more economic wealth? You took more time for yourself, you didn’t delay gratification, and thus made less. Duh!

So those meme’s whining about how much worse things are, only work on people that don’t think.

Yes, more people have dual incomes: but that’s only because we have multiple cars, eat out more, take more vacations (more travel), live in bigger houses, have better healthcare, buy far more stuff (TV’s, Cell Phones, Appliances, Entertainment/Exercise Equipment), borrow more, watch more movies/entertainment, and so on. If you had all the amenities of the middle class in the 1950’s today, you’d be called poor by today’s standards, and rich by the rest of the world's. Remember, our poor live better and have more purchasing power than most of Europe's middle class: they just live smaller and with less.

But I heard the middle class is disappearing and income inequality is growing? 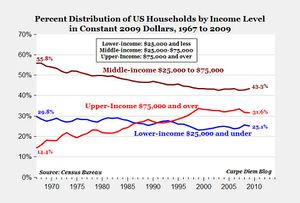 The middle class is disappearing… into the upper class. The politicians and flim-flammers leave that last part out.

What happened is like the experiment where if you give monkeys unequal rewards for the same work, the one getting less, gets frustrated and demands change[1]. Well, progressive politicians learned that their base is like monkeys, and thus they convince the gullible that working at McDonalds is worth the same pay as years of study in financial banking or engineering, etc., in order to pander votes from the monkeys.

Even when you adjust for constant dollars, you find that poverty has fallen, while we raised the standards for what’s “poor”, and the number of people in the upper quintiles has grown. It doesn’t fit the meme, but it fits the facts.

More than that, the richest men today (Gates/Buffet/etc), are worth about 1/5th - 1/10th what the richest men of yesteryear were worth, or less. Rockefeller could have payed off the national debt when he was alive ($19 trillion today), or if he owned all the companies he once did, today he'd be worth trillions of dollars. 10 of the richest 13 Americans, are from 75+ years ago, back when there was REAL income inequality (and higher economic growth and opportunities to go with it).

Now while this Malthusian Chicken-Little stuff has been going on for hundreds of years: everything is going to get worse, if you don’t hand over your rights and incomes to the protection racket. The recent origins of this fraud, came from a “French economist" named Emmanuel Saez, who showed that incomes hadn’t risen (by looking at reported income to IRS), and by ignoring all the ways incomes had risen. We’d just taken most of our income growth in increased benefits like healthcare, time off, and untaxed retirement, and so on. He was quickly rebuked by many real economists in all the ways his charts ignored the real improvements in lifestyles, hidden income and purchasing power. Then a different woman-beating French Economist named Thomas Piketty, decided to camouflage the same discredited data in a 600 page, table filled book, "Capital in the 21st Century”. (A play on Marx’s Das Kapital). Piketty retreaded the claim/study that incomes had only risen 3.2% in the last 30 years, but his numbers (and arguments) were immediately eviscerated by real economists, who know it’s more like 10x that number. (Not to mention his even lamer conclusions based on his flawed assumptions).

Income inequality is a distraction 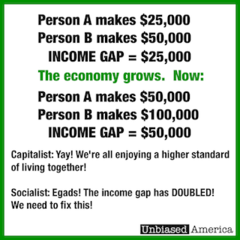 Most importantly, income inequality is bullshit. If you care about it, you’re being an idiot. Just think it through:

In truth, if you look the ratio, the difference between the rich and poor actually halved (they’ll ignore that). And the ratio doesn’t matter anyways. What should matter to you is not how much more your neighbor has (that’s greed/envy), what should matter is how much better your life is.

While envy and resentment has existed since forever, a lot of this technique for how to rationalize it to the gullible for political gain, originated with Fascism and the invention of the Gini Coefficient:

Are you better off with 15x as much as before? (3x as much after inflation and purchasing power adjustments)? I should think so. The fact that some of your neighbors have more than you is utterly irrelevant to your wellbeing, unless you’re an envious or gullible putz. 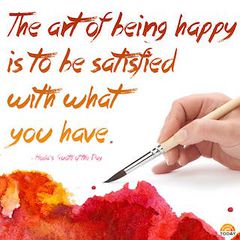 There’s always someone poorer, and happier — and someone richer and less happy. Which do you want to mimic or learn from?

The statists (whether Fascists/Marxists/Progressives: all different variations of the same flavor), are trying to prey on the flawed charter traits of humans: greed, envy, jealousy, in order to shut down your reasoning brain, and get you so emotionally invested, that you’ll give them money and power, to “Fix things”. But once you give them that power, the fix will be in: for them.

The wise notice that the key to happiness is not the greed and statists versions of “fairness” -- but contentment, liberty and diversity.

People are smart enough to make their own decisions. Some will choose to work harder for more material wealth, others will tradeoff free time and flexibility for less income. Some want to change the world, others want to surf and get stoned. Some want to be athletes, and others artists. Diversity is a great thing — and that will lead to diversity of incomes and outcomes. It's much better than grey unitard one-size-fits-all Mao suit and the conformity of a socialist dystopia, if you ask me.

So if you want to be financially more secure, it’s easy. Learn to live below your means. (There are always people making less, and still saving more, and giving more than you do). If you are lured by the cry of inequality, it would help to remember the number $30K. If you make more than that, you are the 1% (globally). And any excuse you make to steal from the 1% in the U.S. to make things "more fair", then the rest of the world should be able to do to you, since you are the 1% globally. (There’s no reason equality and fairness should stop at the border, right?). Instead of being greedy and envious and looking what you should be able to take from others (and having the cycle repeated back at you), and dividing us all -- you should probably learn how to be more content and happy with what you have. How to help the less successful up, instead of trying to figure out how to hold the more successful down. You’ll live a happier and better life, and so will all those around you.