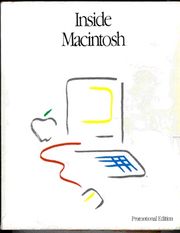 In 1984 Apple released the Macintosh with the famous "1984" Commercial. They also released the less famous "Inside Macintosh" volumes 1, 2 and 3, which were 3 books printed on cheap paper which looked like telephone books, that were the developers bible. Later, they added many more books to the series, and printed the whole series on better stock.

These books contained all the Mac API's (application programming interfaces), which is really just a fancy way of saying a list of all the things a programmer could ask the Mac to do for them, so they didn’t have to write that code themselves — print a character, draw a line, send something to the printer, get the next character from a keyboard and stuff like that. Since big applications are millions of lines long, no single programmer writes it all. Thus programming usually involves stringing together a series of commands to do something, interspersed with asking other people’s code (routines) to do things, into something that’s useful. The more Apple wrote for the programmers, the easier it was for programmers to get their jobs done. And the Mac tried to get the programmers to think different and do more, by providing more routines than any personal computer that came before it had: and Inside Macintosh was the divine tome of knowledge from which you tried to divine how to do everything.