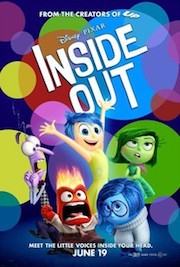 I dragged my wife to see this, as I do many/most Pixar movies.

This one was very cute, with brilliant moments. It totally deserves kudos for imagination factor (in showing what's going on inside people's heads, and dealing with conflicting emotions). And it'll give you a lot of tools to talk to kids about what they're feeling. As the review said: inventive, gorgeously animated, well written, etc. Something to take kids to see. But at 98% reviewers like it? I think that's a bit overrated.

Not that you won't like it, but I doubt it'll be the best thing you see this year. Just a good/entertaining movie for the kids. Don't get me wrong, if you want to see a Pixar movie with the kids, it's completely worth seeing. And there are quite a few times I laughed out loud. But you know exactly where it's going, and it drags a bit 2/3rds of the way through (to me). It was a bit slow in getting there. My wife fell asleep. Some of the most hysterical parts were when they were comparing what other people (or various animals, during the credits) were thinking -- and too much of the movie plot was sort of this side adventure that had little to do with the main plot to me (the girl's feelings).

So it told a cute story, it had a good message. I would definitely let kids see it. And it had some brilliant easter eggs -- like talking about putting dreams through the "reality distortion filter". This one was strong on originality, a little slow in the middle, with some neat messages, and empowers parents to talk to kids about their emotions and feelings more. It was my least favorite of the Pixar Genre, but that's still pretty good. So it was very good, not great to me. And I was definitely lower than most on the customer satisfaction with its 98/89 rotten tomatoes scores.