Fascism is categorized by some as "right wing", because in Europe (historically), left and right isn't liberalism vs. conservatism, it often means individualism (left) vs. authoritarianism or collectivism (right). So by that definition, British and American Liberalism (Libertarianism) was considered left wing, and Fascism was right wing because it was authoritarian and collectivist (not individualist) - but that means Socialism and Communism are right wing well. While in America, our terms reversed: individualists (libertarians, classical liberals, conservatives) tend to pool on the right, not the left, so the terms/meanings/roles are directly reversed. If Fascism is right wing in Europe, it's left wing in America (or they were using a different dimension to compare it on. The same way in America, Conservatism means go backwards: back when we had less government control, but in many European countries, conservatism can mean going back to when they had Monarchs and more authoritarian control. These terms don't translate as well as some people think.

What they were for and against 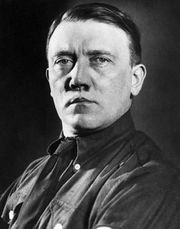 The tenets in common across fascist countries were:

The only thing that doesn't fit modern western progressivism is militaristic nationalism, and that fit at the time. American progressives in this era were highly supportive of fascist ideology. However, since WWII, the term "fascism" fell out of vogue, progressives replaced national-militarism and racism with multinational-militarism and Social Justice Warrior programs (forced equality) as the premise for why they should have supreme national power. This is not a huge stretch -- instead of having a nations military forcing your agendas on others (national imperialism), you'd have a super-national organization (the U.N.), using the military force of many nations to force your agendas on others ("New World Order", etc). That's just replacing national-fascism with super-national fascism; a pretty subtle distinctions that doesn't require much of a philosophical shift at all.

History and it's origins

Similarities to today include leftist movements such as Occupy or Black Lives Matter, which are the same kind of populist uprisings that the Socialists, Communist and Fascists all supported: a remaking of the country because of injustices. They may not be identical in cause, but they have many of the same supporters. Whereas these movements are in direct conflict/contradiction to right wing movements/philosophies, which are trying to move society to more moderation or traditional (past) systems/solutions. (not remake society into something new)

Even the rhetoric of Occupy is amazingly similar to historical fascists. I've joked that the only way you can tell the difference between the 30's fascists speech and todays occupy ones, was if they include the word Jewish when they scapegoat the 1% as, "rich Jewish bankers, media magnates, and industrialists that controlled the system and oppressed the workers". But even back then, Italian fascists didn't have the anti-semitic streak that the Germans had (making distinction harder), but they weren't as anti-business/corporate either. The solutions in common is always a new authoritarian government (controlled by the people, this time) to fix things -- and pick winning and losing sectors (some deserve subsidies, others penalties), all in the name of the greater good (think "Green Energy and Solar Subsidies).

Progressives of today, even use the "Gini Coefficient" (an arbitrary measure of rich-to-poor income inequality, as if they know what that ratio should be, and non-compliance to their construct is a known problem) to proclaim why we need their authoritarian guidance, while they completely fail to recognize that this ratio was created by Corrado Gini -- the guy who literally wrote the book, "The Scientific Basis of Fascism", which was the pseudo-science justification used by both Hitter and Mussolini as economic justification for their policies.

I watched some great debates in Wikipedia on this topic (in the Talk section on Fascism), that covered all of this.

Some political historians were complaining that "right wing" completely deceived the American audience (since the terms were reversed/opposed), and it should be called out or clarified. It went back and forth, and this faction won the logical/historical argument for the U.S. audience. But once losing the logical/factual argument, the lefty-faction "won" by declaring that it was better to cater to the Euro-centric definition of left-right than the American-centric one, AND it would be a waste of space to clarify that for either audience. So they rejected/removed those edits... AND then purged the debate from the talk section AND then they purged/blocked the people that disagreed with them -- that way there would be no hope of balance/education leaking into the threads on fascism.

Thus ended my illusions that "anyone with a valid point" could contribute to wikipedia. All the correct points were made, and supported with facts and links, but it didn't fit the agenda, so bye-bye.

Who says it's right wing?

What is interesting is that those that claim fascism is a right wing philosophy come in a few flavors:

None of those are really good options.

If we give the majority (in the media and history books) the benefit of the doubt, then we know they're biased/socialists: in order to sincerely believe their view, you must start by adopting the ideology of a theoretical socialist (thus everything is to right of them, or at least they're too ignorant to know better). Thus many deniers that Fascism is a left-wing ideology, are proving their own bias towards views of Socialism (that appeal to teens and ideologues).

But this gets pretty meta, so the less intelligent side wins, as they can usually stall or confuse the argument long enough for the masses to have their eyes glaze over, and forget the question. And if you point this out, they'll just claim you're attacking the messenger fallacy, instead of trying to look at the realistic options. So it's a wasted path in most discussions.

When you look at fascim on the different dimensions you see"

There are other ways to look at political spectrums, and those too can muddle the left-right debate a bit. But in most dimensions, the American left is far closer to fascism than the American right. Which is why they get so angry when you point out History, or try to discuss the facts -- their only defense is distraction or re-defining history of language to protect themselves. Thus the truth (and those that preach it) are their enemy. So the become indignant, irrational and emotional if you start trying to decompose their arguments, or want to write articles like this to really look at History or what the terms mean.