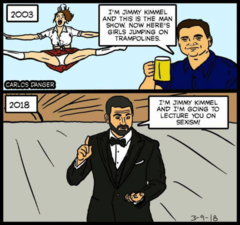 Jimmy Kimmel was a misogynist and not-very-funny pseudo-commedian of the Man Show, before he became a host of late night TV. Then he decided to become "woke". Instead of taking the Johnny Carson tradition of poking at both sides, but mostly staying out of politics except for some zingers -- Kimmel became an SJW moron, that alienates anyone with a triply digit IQ. Instead of replacing Johnny Carson he decided he wanted to replace Jon Stewart, because Stewart had lower ratings, lower IQ audience, and won all sorts of Hollywood awards for his dishonesty. Who wouldn't want some of that?

A college drop out, his original family name was Kümmel, but that sounded too German, hence the anglicization. His biggest influences in comedy are David Letterman and Howard Stern: both loudmouthed unfunny douchebags, and Kimmel is doing his best to combine the unfunny and uninformed political ramblings of the insane Letterman, with the abrasive insensitivity of shock-jock Howard Stern. He once wrote a fawning love-letter to Letterman, in Time Magazine.

NOTE: I have no problem with people who dropped out of college, or never got a degree. But if you're not an academic, or even basically informed on the topic, and you feel like lecturing people with more knowledge, pedigree and accomplishments, then I think rubbing your nose in your lack of academic accomplishments, is valid. 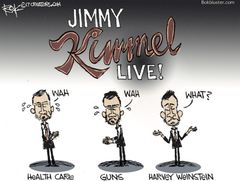 Kimmel's go-to tactic is to pick fights his IQ isn't up for, then when he loses on the merit's of the argument, to attack the people. When others go high, he goes low: right to attacking someone as a person for being more informed and still disagreeing with him. Some conservative bitch fights he's lost include: Crowder, Ben Shapiro, Hannity, Ted Cruz, Donald Trump.... are you noticing a pattern? He attacks right-wingers, and gets his ass handed to him, on a pretty regular basis. And still he doesn't learn.

He also believes in mocking (dehumanizing) anyone he disagrees with. He pulls stunts like sending mock-rednecks to Alabama church's to taunt the religious. [1]

TDS is also knows as Trump Derangement Syndrome is a real malady, and poor Kimmel is a victim and host. He seriously and sincerely hates Trump with a tear-inducing passion, based on abject ignorant and bias that only a progressive can muster. So everything he does is to undermine the elected leader, and play politics.

It's not just about a policy disagreement between the informed and the Democrats (though that is really what it's about, even if Kimmel doesn't understand it)... for Kimmel, it's about anyone who disagrees, must be mentally disturbed hater, that wants to see kids die. And Trump disagrees with him, so is the focus of all this little man's hate. It's cringeworthy. 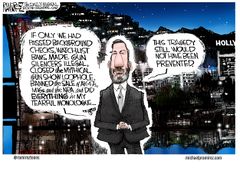 Jimmy Kimmel is to gun control arguments, what a Narwhale is to trapeze. He knows nothing, would be inherently bad at it (and dangerous), yet that doesn't stop him from pontificating on his brilliance. And I don't mind that he's flamingly ignorant on Guns, Gun Control, and whatever he has opinions on. I have a problem that he thinks he knows what he's talking about, and a few of his least informed audience agrees and nods and thinks he's qualified to have an opinion because TV execs anointed him with a low-rating late-night TV show. [6]

While having a sick child has never magically transformed an uninformed comedian into a political policy savant, Kimmel thinks he is the exception to this rule.[7] He became an instant expert on how cruel Trump and the Republicans are, because they can do basic human nature, math and economics. Oh, and because he started getting his talking points and comedy track from Chuck Schumer. [8] Kimmel not only thinks his view is right (based on ignorance of the basics, and a complete lack of balance), but he also seems to think (or act like) anyone who disagrees must be evil and disturbed. This epitomizes the liberal media's view of the world: our way is good, anyone more informed is evil.

This caused a bit of a war with Ben Shapiro, where Kimmel was once again completely outclassed, both intellectually and in actual class and depth of arguments. Shapiro's points are exploiting your child's malady for your own profit is a bit the TV show hosts version of (MSbP) or Munchausen by proxy.

To prove he was now a partisan polemic before being a comedian, Kimmel used his show and fame to attack Sean Hannity, the anti-Kimmel -- a slightly funnier, much more factual and slightly less polemic conservative comedian. Remember the context, Kimmel made inappropriate jokes about the first family (normally considered off-limits in decent circles, just not liberal ones). He got slammed by Hannity and had a back and forth where he lost every exchange, and Kimmel proved he was a not-funny and secretly nasty person. Then he decided to cut-and-run and pretend to take the high road and "not lower the tone". Pretending that it was he that got dragged into a nasty argument, instead of the instigator and loser. [9]

Kimmel's non-funny act including comparing Senator Cruz to a blobfish (voted the ugliest creature in the world). Cruz is a constitutional lawyer that can argue circles around Kimmel, and who brought and won more cases to the Supreme Court than any of his contemporaries. If you can't argue the merits, then attack the person (ad hominem), especially something shallow like their looks or privilege: something they can't help. If a conservative did it, they'd be attacked like Rosanne not realizing Valarie Jarrett is black. But since it was a Liberal attacking someone for their looks, it's funny.

For all Kimmel's trash talk, he lost. And Cruz who proposed it for charity, was resented and boo'd by Kimmel's audience for doing some actual good. It's how the left roles, attack everyone that's different from you as being too racist, bigoted, and ugly, in the name of tolerance. [10]

When Kimmel hosts the Oscars, politics reigns (in his monologue and everywhere else) and ratings tank. People watch award shows for glitz, glamor and the movies -- not SJW lectures from the High School drop-outs like De Niro. 'In business, that would mean replacement, in Hollywood that means standing ovations and awards, as long as your politics is far-far-far left of rationality. [11]

Los Angeles street artist (Sabo), took to mocking Jimmy Kimmel for his hypocrisy and crocodile tears. (Kimmel had no problems with the same policies in place under Obama). [12]

Not a smart man Kimmel implied Nixon was impeached.