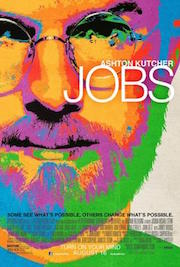 Hollywood has this attitude that fiction is more interesting than real life. I find the opposite to be true. They sincerely seem to think that Michael Moore or Oliver Stone are better at documenting the Hollywood version of truth, than the facts and history would be. Like Meryl Streep well acted but fictionalizing Margaret Thatcher, or Ashton Kutcher getting the mannerisms right, makes up for fictionalizing or failing to research the story itself?

And to a point it is.... It is more interesting to people that don't care about the truth as much as they care about shallow entertainment and becoming more misinformed about a topic or person. Now they'll run around spouting quotes about as accurate as, "I can see Russia from my house".

For myself, I read or study the real history. The good and bad, the balances. I don't want caricatures of hero's and villains. I want to understand the people. And if you can spend a little time and effort getting the basic facts right and looking at the nuance and conflicts that are real people and real situations -- then I have no problem seeing your film (even though there will always have to be shortcuts, flaws, and abbreviations to fit the format).

So I'm not interested in supporting a well acted, but intellectually vapid and inaccurate Hollywood movies, that are shallower than Kim Kardashian's wading pool, and don't at least TRY to tell the truth. Thus I'll wait until I can watch this, without giving a nickel of my own money to supporting the assassination of history.

Now, Walter Isaacson's book on Jobs was pretty good, but flawed. Walter is not a tech guy, he was a people guy -- thus he couldn't and didn't call Steve on his bullshit (when Steve was flim-flamming him on some of the tech history). I imagine that's part of why Steve picked him in the first place. But overall the book was a really good people story. It dove fairly deep and made a strong effort to offer balance. It was too soft in parts, but far better than this deification of The Steve. So I'm hoping a movie based on that book, will be better. It certainly starts with a better core, and it at least tried to consult people involved (like Woz) on what happened -- and that hints that they'll try to offer the core of truth in an entertaining way.

Saw it. It was below expectations, which were very low.

Apple employee Bill Fernandez summed up my feelings when he described the film as "the biggest, flashiest piece of fan fiction that there’s been to date".