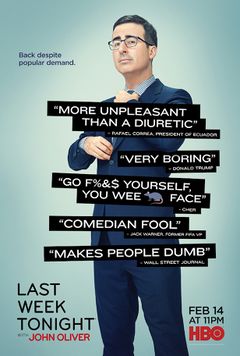 John Oliver is Jon Stewards perpetually outraged successor, but it feels like he's Jon's British Socialist cousin -- which isn't a big stretch as sympathy for statism seems to run deep in that family. It's their schtick: look at everything in the world as if you're channelling Mao or Michael Moore, if either had an occasionally amusing sense of humor. They're funny, if you don't think too deeply of their policies and consequences. But if you do, they're just Patch Adams telling crippled jokes to amputees at Walter Reed hospital.

The oldest trick in the Socialists book is whenever it fails (which is virtually always), they try to blame the failure on, "real socialism has never been tried".

Listen to him and you learn the following:

So Venezuelans followed socialism to the letter, and got the corruption, abuse of power and collapse that you got in virtually every other country that tries socialism and these same techniques... but don't blame socialism. After all, it's the cronyism, corruption, incompetence, and fighting to be on the bottom that comes with socialism that's at fault.

Then whenever it fails (which is virtually always), the socialist cries, "but real socialism hasn't been tried", just like John Oliver does. Finger point, distract, but never, ever, ever consider the root of the problem is the consequence of the philosophy and policies, just because the evidence is staring you in the face. The true problem is the charisma of the leader, not the policies that always end this way.

Another common technique of the far left is double standards and broad brushing.

The left is mortally offended if you try to couple their leadership to their actions and associations, "Why just because Obama attended reverend Wrights church for 25 years... and was buddies with Farrakhan, doesn't mean anything about HIM!" They will attack anyone that tries to hold their side responsible for their own action.

But like the video shows, they have a much lower standard for the other side. They like to find the most ridiculous extremes of the other side, and broad brush and play guilt by association. Like this clip trying to associate InfoWars, with all conservatives. Even there, they often fail. Te little idiot that replied to the InfoWars person was pure comedy Gold with her clueless condescension, while I didn't see anything much wrong with what InfoWars said. But Oliver will quickly mock them both and move on before their side thinks too deeply about what the other side actually said/thinks.