I saw the teaser for John Wick 2, and decided I wanted to see them in order. So I rented John Wick 1 and saw it first. Then later, I went and saw Wick 3 when it was released.

Honestly, as someone with a bit of training in both combat shooting and martial arts, the first movies gun-fu scenes were the best I've ever seen in the movies, and the behind the scenes stuff shows that Reeves really put in the time to get trained and took it seriously. Wick 2 took it to more absurd, but still was good. Wick 3 kept trying to overdo the first 2. In the end, how many people can't hit this guy?

It was in some shooting forums that they were showing Keanu Reeves shredding his combat shooting training, that brought it all together. I saw the teaser and thought, “Oh! That’s what he was doing, training for a movie. Well then, I have to see that movie”.

After watching him, I’m a better Martial Artist than he is (though he’s in a lot better shape than this pudgy middle-ager), but I’m pretty sure he’s a lot better at combat shooting, and I’ve put in a couple hundred hours over the years. So he earns my respect, even if what he was doing was choreographed and got multiple takes.

Light spoilers ahead (nothing you wouldn’t get out of the previews, but if you know nothing and want to go in fresh read the rest of the review after you see it). 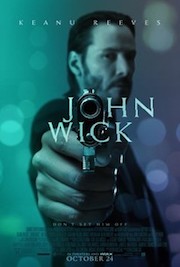 So I watched the first movie and loved it. On Rotten Tomatoes it got 85/80 (Reviewers/Viewers), which is pretty good. I liked it more than that. Not that it was a deep film — it was as cliché revenge flick as you get. Wife dies, thugs steal his car and kill his dog, and it turns out he’s one of the baddest retired assassins in this giant underground alternate universe of assassins — so he goes on a murderous rampage that kills a lot of bad guys.

With lines that are instant cult classics.

The style and cinematography made me think it was a graphic novel (and a good dark one). It has anti-heroes and villains, and a ton of style — all hinting that things going on around you that you’re just oblivious to. While you can’t take it too seriously, it hit me as a Blade Runner for this generation.

There’s a ton of fight comedy and realism — like he shoots a guy coming around a corner in the toe, and when the guy bends over in pain, one in the head. He’ll flip a guy, shoot another guy, then finish off the first, and so on. It’s harsh and dark, but is stuff you don’t see in most movies. So brilliant and fresh. If you’re into action and super-hero type shows, this one has more style than most: a Kung Fu movie with Guns, in sort of a Harry Potter like universe that’s bleeding into our own. 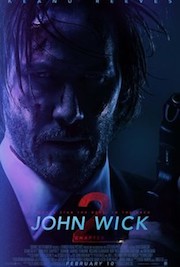 It had big shoes to fill to live up to the first one. For Rotten Tomatoes viewers it was better than the first, with a 90/91% rating (Reviewers/Viewers). It didn’t carry quite that well for me. I’d swap the first movies 80% with the second movies 90% — which means I enjoyed them both, but the first one more.

This movies just continued where the other one left off, quite literally. And the story just goes goes on, but in a fresh direction. The writing was actually a bit deeper, and you got to see more of the world, and even more action than the first one. The sets bigger, more characters and character development, more mayhem.

So I get why others liked it more — it was a completely respectable continuation of the franchise. But for me, the first one was fresh, and nothing in this film came as a surprise. There were some things that were too over-the-top for me (the Operators and the network). The fight scenes while good, were getting a bit rehashed, and just making them longer with more people dying, doesn’t make it better. And there were too many cases where he didn’t opt for the most efficient kill, and went for hand-to-hand combat instead — and while jujitsu style grappling arts are some of the most effective in 1-on-1 situations, it’s never a good idea to go to the ground in a 1-on-many situation. And the ending was too much of a cliff hanger or lead in to the next sequel.

So while there were still some epic scenes including: the Sommelier, Cassian on the subway, the Bowery King — I still felt it was a little less than the first one, but still completely worth my $10.

If you want a funny parody of John Wick, here’s one of the first one, where John Wick is killed, and his dog goes on a revenge-murder spree…. bad doggy.... baaaaaad. 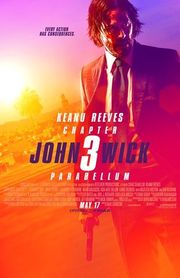 While John Wick 3: Parabellum got good Rotten Tomatoe reviews with 89/89% (Reviewers/Viewers), it didn't fare that well with me.

The 1st movie had fresh, the 2nd had a bit more depth and backstory, the 3rd was a 2 hour running shootout. This movie just continued where the other one left off with a giant chase scene where everyone is out to get Wick because of the $14M price tag on his head. Again, the shooting and action scenes are well choreographed, and it has moments: my favorite was when everyone runs out of ammo at the same time, and they all have to mag dump and reload the quickest. But everything was a completely, "been there, done that" for me. So while everyone was good, Halley Barry was great, the whole thing was like the 3rd night in a row having lobster. If you like the series, you'll probably like this one too: it's more of the same. But I could watch the first movie over again, and get that too.