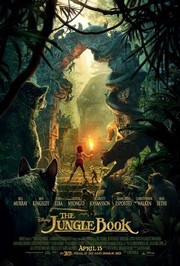 I wasn't that interested in seeing the new live-action Disney Jungle Book (directed by Jon Favreau). I vaguely remember the original books being creepy and dark, while the 1967 Disney Animated version was a lot of singing. But I'd talked to a co-worker in India, and he was explaining that it was all the rage over there (he'd tried to get tickets but it was sold out): Mowgli being an Indian kid, and it being good PG rated family film and all. So I checked Rotten Tomatoes and it had a respectable 95/92% approval, and I figured, "what the heck" -- if it's going to be big, I might as well see it, for social value.

Definitely a lot of kids

Since I saw the film when I could count my age on one hand, the memories are a bit fuzzy. But also the kid in it looked like me -- so I sort of bonded to it. (The Iranian decent, I was a darker kid with a mop of hair not unlike his). So I really don't remember much: snake, panther, monkeys, singing. My wife mentioned the bear, and I both remembered"Bare Necessities" song, but thought wasn't that the Song of the South? (Brer rabbit)? And then Disney's Country Bear Jamboree memories got mixed in. (I remember Disneyland from before that was built, watching that who area get built, then going to the opening). Plus bears don't make sense because India has tigers, not bears. Turns out, yup, that was the movie with that song -- and India does have a sloth bear, so the whole, "bears don't live in the Jungle" thing was wrong. And in even more irony, the Orangutan in the original doesn't live in India: so much for my Zoology trivia.

The story was loosely the same: little boy (Mowgli) the protagonist, is saved by a panther (Bagheera), raised by wolves, tries and fails to become one of the pack. A man-cub's existence irks a bengal tiger (Shere Khan), the antagonist, who then threatens Mowgli and drives him out (to go back to the man-village), with various adventures along the way, including a snake, monkeys, and bears (oh my).

In Kipling's time, nature was something to be overcome -- but the director wanted a more "nature needs to be protected" theme. And there was a lot of diversion from Kipling's original (or the other Disney and 3rd party adaptations). A story inspired by the original, but not quite fitting the original.

Visuals were worth it

Still, the live action is incredibly good. This pushed the state of the art photorealistic rendering, computer-generated imagery and motion capture technologies, to the point where everything looks real and pretty natural. There's something called the creepy or uncanny valley, where if animation looks too real and isn't perfect, then your brain really doesn't like it. (Or mine doesn't). It's just creepy and weird. A few movies went there -- the most memorable for me was Polar Express, where it looked too real, but not quite, and was more eerie or disturbing than good -- it was distracting. This leapt over that divide, into something amazing -- you just watched computer animals do their thing, completely believable as real animals, and just followed the story.

But a bit overrated overall

In the end, it was probably over-rated to me. It was interesting, watchable, and incredible for the visuals. The plot and pacing where fine. I'd give it a good, and worth seeing. But somehow, I expected more and was left a little wanting. I liked the 1967 movie ending more -- this left more room for the pending sequel. The story wasn't bad, but it fell below classic. It felt a little politically correct, or like it was trying too hard -- but I can't point to any one place where it was. The lines were cute and entertaining, but below a Pixar or Dreamworks film. It wasn't as Jovial as the 1967 film, it wasn't as dark and scary as the books, yet it had elements of both. So I'd really suggest seeing it, with lower expectations than I had. So I liked it, and think everyone involved did an amazing job (acting, direction, animation, etc) --- but it just didn't have the instant classic of a Lion King or Finding Nemo, or one of many other better films, that I sort of expected. And it's more for the 10-12 year old kids (if they can handle creepy/scary) than the broader, bringing it down to 6 or 8 year olds.