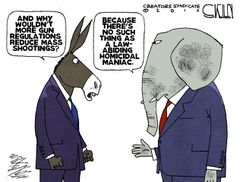 Anyone that says any variant of "Just ban assault rifles", "no one should own military grade weapons", or "it's not all guns, just these killing machines" shows they are completely ignorant about assault rifles, or bans. This article breaks down why you can't ban "Assault Rifles", and why it would be moronic to try.

What is an assault rifle?

Main article: What is an assault rifle?

Since the 1930's an assault rifle is fully automatic (select fire) military weapon (one squeeze of the trigger fires multiple bullets). Then in 1988 gun-control activist (Violence Policy Center founder Josh Sugarmann) invented the term "Assault Weapon", to include civilian semi-automatic weapons (one squeeze of the trigger fires one bullet), because it had a few cosmetic features in common with assault rifles, and because the public might not be able to understand the difference. The media and AP immediately went along with the ruse to dupe the public.

So an assault weapon is just a low-powered (smaller cartridge) hunting rifle with some wooden parts replaced by plastic parts (to lighten it), and some cosmetic accessories thrown in; like a pistol grip, barrel shroud, flash hider, accessory rails, or collapsable/foldable stock. Most guns have removable magazines, and the biggest difference coastal progressives point to is a pistol grip or magazine size. But all these features are easily swappable after-the-fact, none of which changes the lethality at all, and people can convert most rifles back and forth in about 10 minutes. Which is why gun enthusiasts think gun controllers (and their voters) are completely uninformed about guns 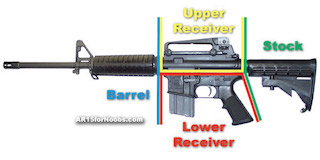 The two halves go together with 2 locking pins: it takes about 10 seconds to take the gun apart, or put them together.

All the parts and accessories are interchangeable, that’s why people like them — they’re modular — you can tweak and tune for what you want: it's the Lego's of gun construction. The AR isn't a weapon as much as an open source platform for accessories to build a weapon with. This is why it became the most popular target, sporting, training and hunting rifle in the U.S.

Which leaves you with a problem: imagine you're the ATF, and you need to categorize which of these dozens of parts, is the gun?

A barrel isn't a gun, nor the bolt, stock, grips, sights, magazines, and so on. All those are just parts and accessories. The only thing that's the gun, is the frame of the gun (lower receiver). That's what you register, stick serial numbers on, and control: just like a car. The frame is the car, the engine and body panels are just parts you put on the car.

Now think harder. Imagine that a chunk of plastic or metal (the frame), is a gun. That's what you're trying to control?

Right now, if you want to make an AR-15, which is just a chunk of plastic, wood or metal, you're trying to outlaw someone from carving, machining, molding, welding, gluing, printing, or otherwise making something, that was designed in the 1960's to be cheap. And really isn't that different than guns designed in the late 1800's, and people were making gun frames in the 1400's, with much more primitive tools and knowledge than we have. Gun controllers make luddites look like futurists!

We're not some Island nation with civil liberties that are only "granted" by the queen. We have a history of innovation, determination, and revolutionary independence, combined with laws protecting against suppressing free exchange of ideas and free trade.

Since you can't outlaw people making something, or buying the pieces to make something, there's a few dozen ways (and kits) for good guys (and bad guys), to make an AR-15. You make the frame, and everything else is readily available to buy/trade. But there are people that have made every part of an AR-15 themselves. I list just some of the ways to make one below.

And remember, an AR-15 has a pretty complex frame. An AK-47 is cheaper and easier to make. Famously, one guy made one out of a shovel: pound it flat, make some bends and cuts, attach some parts, voila. I have yet to meet a gun controller that could explain how you could stop that. [10]

I use AR-15's as an example, but the idea of a modular gun platform isn't unique to the AR-15, it was just the first and most popular. There are a few other popular platforms that come stock looking like a traditional hunting rifle (or pistol), and in 5 minutes you can change the stock, the accessories, and it's indistinguishable from other "bad guns". (Black plastic ones that look mean). Did it change the firepower or lethality? Nope. But it scares the bejeezus out of the hoplophobes (those with an irrational fear of guns). So even the gun-controllers could outlaw AR-15's as a platform, gun advocates would move to another platform, or worse: design an even better one. (The AR-15 is actually a 1950's design, and can be a bit persnickety on ammo. There are better designs out there and possible.)

What the left really wants is to outlaw knowledge of how to make guns, or criminalize the thoughts of anyone who enjoys guns or gun sports. They just don't have the honesty or enough introspection to know how to elucidate it. Or worse, they know if they told the truth, they'd never get it, so they just lie.

Even if you could outlaw AR-15 kits (you can't), there are dozens of ways to build a zip-gun (improvised firearm), from scraps around the house, or from $30 in parts at Home Depot. Google "How to make a zip gun" and and there are dozens of how to videos and diagrams.[11]

The uninformed imagine that at least they reduced firepower, but that only proves how little they know.

Fully automatic weapon designs go back to 1862. A drill press and a mill vice is pretty much all you need to build anything, and those tools today are more powerful and versatile than anything they had in the 1860's. If a child is smart enough to plan out a mass murder (and defeat counter-measures in the process), then you have to be a complete moron to think they couldn't get or make an AR frame or other weapon (whether it was illegal or not). If prohibition works, we should try outlawing alcohol, drugs or prostitution.

If you know gun history, you know that in 1779 we had the .46 caliber, 22 shot Girandoni Assault Rifle. It can deliver 88 shots in under 5 minutes (more than most mass shooters have done), was used to hunt bear or elk, and is why the Indians left Lewis and Clark alone on their journeys, and since it is an air-rifle (with the ballistics of a modern pistol) you can buy a replica or equivalent on-line, as a teenager. Tell me again how the bans can stop at just AR-15 like "tools of war".

Rifles are used in the minority of killings or mass killings, and unless your victims are over 50 or 100 feet away (which they aren't in schools and buildings) pistols and shotguns are more effective anyways. You'd need to ban them too. And it's not just semi-automatics, it's also revolvers, pump, lever, and bolt action guns as well. Read Guns: Control or ban? for more on why no informed gun advocate buys the argument about reasonable gun laws or that a ban would stop at an AR-15. If the gun controllers knew what they were talking about, they wouldn't be arguing what they argue in the first place.

But let's live in the delusions of a gun-controller and you outlaw AR-15's, what are the odds that you stop criminals from making this easily makable part? Or that there wouldn't blossom a black market for this stuff? Hobbyists are doing it already and have for a few hundred years. And the skills aren't hard at all, nothing a motivated teenager couldn't figure out.

It's actually worse than that, because building bombs and toxic chemicals is even easier. I'm not going to get into all the ways it's easy to kill people, or how much material there is out there, if someone wants to find it they can, in about 10 minutes on the Internet. And you have things like Anarchists Cookbook, Poor Man's James Bond, and books that go back a century telling you how to make stuff that can kill people. As an early teen my Mom had bought a discount encyclopedia set at a Garage Sale or Swap Meet -- older ones (pre-1940's) detailed how to make TNT, fireworks and mortars. I was loved by the kids of my neighborhood, and hated by the parents, growing up. [12]

Pretend you're not a gun controller, and you can think cause and effect. If you take away crazies guns, they can easily go to even more destructive means to commit mayhem. Like driving cars into crowds, or various bombings and the like. (This happens in countries that outlaw guns). Which shows the problem -- it's NOT THE TOOL, it's the person who wants to commit mayhem. The more they research, the more they find better ways to kill people. So it's much better that you don't outlaw guns and leave Hollywood sensationalizing rifles, so they don't start thinking deeply about poisoning the water or food supply, or start thinking about ways to kill a lot more people.

It's virtually impossible to outlaw knowledge, especially and retain the 1st amendment. So if you want to stand a chance of banning weapons, you have to eliminate the 1st amendment along with our 2nd, and then purge the Internet and Libraries of all information on how to make these weapons. Then suppress all Americans from browsing information from other countries (which might not comply with our censorship). You basically want to make Americans live in Communist China. Tell me that won't start a civil war.