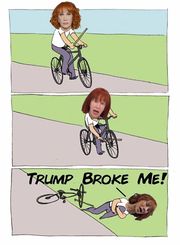 Kathy is a whiney, rude, shock-jock of comedy. Not quite as bad as many of her ilk: Sarah Silverman, Rosey O'Donnel, Samantha Bee and such. But still a generally caustic and not very funny human being.

While shock is sometimes funny, she's more a one-trick pony, than knowing the nuance of how to set you up, and catch you off guard with a shocking correlation later. It's just beat-you-over-the-head with offensiveness until you surrender.

She's the type of classless comedian that would not only go ofter the President for things he did, but for things she knows he didn't do, and attacking his family, including an 11 year old kid. Anything to make a buck and get some attention. [1]

For me, someone that's making fun of everything, can be funny. Someone that tells jokes about things or people they hate, is a polemic. The latter isn't funny, because underneath the burn is venom and hate. It's like the difference between a Jewish comedian telling a Jewish joke, and a Palestinian or National Socialist. I can laugh at the former, the latter just makes me uncomfortable. Kathy has no credibility as an equal opportunity offender. She's a Hollywood D-lister, always trying to getting attention by going low.

She went after Donald Trump with a severed head Photo-shoot. That was too much for even the hypocritical left. Hey, goodonya -- nice to see there were limits. Though the pounding she was taking made me feel some sympathy, and reminded me of one of my more favorite Jon Ronson videos:

Basically it was pointing out that piling on someone for a stupid mistake, in't the noble path. So I was willing to cut her some slack. She apologized, lost her CNN offensive New Years gig, time to let it go. Then she hired a lawyer to help her on Twitter, went on and blamed everyone else for her actions:

If she'd shut the fuck up and let it die (and let the apology stand), I could forgive a loudmouthed caustic trollop letting the words get ahead of her little brain. But her acting like a Clinton and blaming everyone else, takes me back to, "she obviously hasn't learned" and makes me more tolerant to the beatings she's getting by those who took far more offense to her original insult than I did. (It was inappropriate, but offensive attacks are something I'd come to expect from the party of Pelosi, Reid, Schumer, Waters, Warren, Obama, Feinstein, Boxer, and so on). What I take more offense to, is someone that can't own the mistake and must call press conferences and PR Lawyers to try to blame her hate on evil Trump. That kind of scapegoating and not learning from a mistake, makes me much more likely to walk away, and let the mob have their way.