Keep the tiger behind the bamboo

This is a rambling life lesson, that I once learned, and often ignore. My Karate Instructor used to say, "keep the tiger behind the bamboo". The lesson being that if no one knows you or how you think/feel, it's far easier to keep the business professional and not lose customers (since they can't disagree with you, and can only imagine what you do/are). Their imagination of you, is likely more grandiose than any mundane realities, so their ignorance (and fear of the unknown) plays to your benefit.

I get that it works for many. But what kind of world does that make? To me, it's a sad one with fewer deeper personal connections, and a sterile world where people don't have to learn to interact with people they fundamentally disagree with. They don't like the real you, since they don't know it. So I choose a different path, knowing that it comes with costs that the other does not, but the rewards have been many friends that love me for who I am, instead of just the mystery and constructs they've created in their own imaginations.

Kitty in the grass 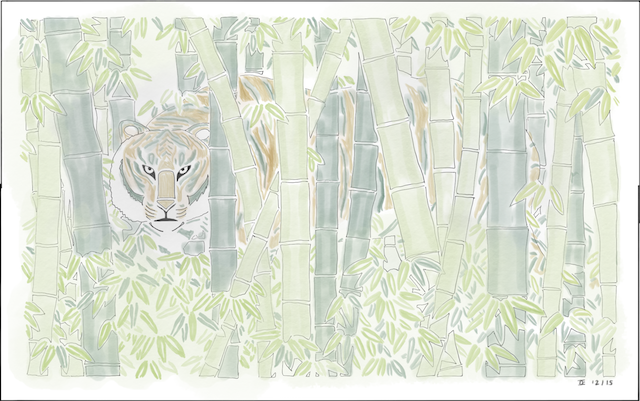 So there I was, teaching Karate in my own casual and friendly (open) way: I was willing to get friendly and let my students know whatever they wanted about me. My instructor came up to me and said, "you've got to keep the tiger behind the bamboo".

I thought, "what in the name of Buddha's BM does that mean?" Fortunately, I was going to learn.

My instructor explained, that humans fear and thus healthily respect the unknown. The product of millennia of natural selection and natures little way of killing off the daring and those that are fearless; e.g. stupid and reckless. I'm sure some humans would say, "I wonder if that big fuzzy thing wants to be my friend". To which the big fuzzy thing often replies "chomp, crunch, gulp... tastes like chicken". I think I had a few cats that happened to as well. Anwyays, after a while humans, and all animals for that matter, get bred to fear that which we don't know, just to be on the safe side - as fearlessness is chlorine for the gene pool, and whoever is left is much more wisely distrusting and cowardly.

The point being that if humans know what something is, or someone's capabilities, they will always have a much less healthy respect for it, than if it is something that they don't know. Ever hear the phrase, "Familiarity breeds contempt"? These are the kinds of things that is referring to.

Now of course I was left to figure out what today's little nugget of mixed metaphors and Oriental philosophy lesson applied to. Obviously, to me at the time, the lesson was about showing people who and what you are, and your true abilities. This became all the more obvious, as like most lessons this was repeated over and over again, over the years.

What my instructor wanted was for me to almost never spar in public any more, and to stop doing my forms publicly as often, to stop discussing my personal life and being their friends; and to become far more mysterious. I can be quiet, and so this wasn't a huge stretch for me (believe it or not). So he was telling me, "You can use that fear of the unknown for your own ends and success". If you leave the students to wonder at what you can do, and wonder about your personal life, and you get quiet and listen a lot and talk little, you become an enigma, wrapped in a riddle, covered by a conundrum. What they build up about you and your real life and your abilities (from their position of ignorance), is probably going to be far bigger and better than what really is. Especially if their concepts are supported by an occasional display or well placed story (by others) with example of prowess. Thus they are always left hungry and wanting more, and what they do know, is sort of legend.

The old, "never let them see you sweat, or get angry, or show pain". The pain thing was true enough. Often some brute would lose control or slip, or get mad and get a cheap shot in. The result was usually a big grin, and a "good one", and then I'd come right back like it didn't hurt; while inside you're thinking, "I got to go poop out my spleen", or, "is the nose still on the front of my face, or is it next to my ear?" That was part ego, but mostly it was just that sparring was mental and spirit; you could win the match right there, because you could take it and keep smiling. The next day they didn't remember your pain (only your immunity to pain), and they certainly had a few throbbing reminders of their own pain; thus they learned the costs of fighting.

That is Captain Kangaroo to you

The Military often has their equivalent as well; "The Captain doesn't eat with the crew".

Again, same concept. The crew runs best if they have a healthy admiration for the Captain, and that view can only go down a few pegs (in mystique and etiquette), if they see the Captain shoveling food like a slob, and belching like a bassoon. Thus the officers mess, being on best behavior when in front of lessors: and hide who you are for the sake of title.

I get the concept, and some management/leadership books teach the same thing; you don't get ahead by befriending your subordinates, only play up. And I'm sure we've all lost respect of some people we've gotten to know better. But it doesn't have to be one or the other, if you can live up to the expectations/ideals you (and others) set for yourself.

Protecting yourself from scrutiny is safe (and can be career advancing). But openness, stating who you are, and what you're about (what are your objectives), and how you'll act a role -- taking chances by giving yourself accountability (if you fail), can help you be the better person, and be worthy of the respect your title/role/identity comes with. So I'd rather fail trying to be what I claim I am, instead of just making them think I am something that I'm not. I don't need them fearing/wondering at sounds of a tiger pacing and growling behind the safety of the bamboo thicket -- I'd rather they say me doing my best to be the leader that they want to be.