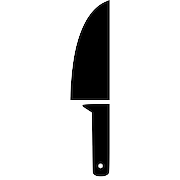 While I wish it was a joke, California, UK and Oz (Australia) all have "knife control" to keep the public from having pointy things. And they're adding more of these laws to protect us, all the time. Never mind that criminals ignore dumb laws by nature of them being criminals, so all the laws can do is punishing the innocent. Worse, since gun control laws seem to result in more violent criminals using knives, and thus more stabbings (up to 5-10x our rate of stabbing), they are looking at adding many more laws to protect us from the dreaded assault utensils. Seriously, don't stop rampant criminal immigration, or punish criminals, it's time to outlaw pointy things, and demanding cooling off periods before ordering cutlery. Politicians are willing to turn law abiding citizens (collectors/practitioners) into criminals, and waste the courts time and money, and distract law enforcement from more serious issues.

Save us from pointy things

Now before you assume it is ridiculous to be afraid of pointy objects, and I'm just reducing the old gun control arguments to absurdity (reductio ad absurdum), you need to realize there are actually groups in the UK and US (especially California) working on knife control/knife turn-in programs and of course the assault machete/switchblade and sword problems.

To be fair, while the uninformed think that guns are a lot more dangerous, trauma statistics show about equal rates of mortality/survivability between stabbing victims and gunshot victims. Knives are quieter, so people are usually stabbed more than once, and places with gun control, have far more stabbings than those without (like the UK). So all the traditional gun control arguments, and fallacies, can be applied to knives. Think about it. If you blame the tool for the actions of felons, and stabbing and assaults with knives are off the chart bad over there (5-10 times worse than in the U.S), then this is the next logical step.

Spring loaded knives, or knives that can be opened under the weight of the blade are considered crimes in California (and other states). Most switch blades aren't very good knives because it is hard to get a good/reliable blade (heavy) to extend well with a spring (and have a highly reliable mechanism). So while Hollywood would show gang members or muggers using them, real criminals and thugs always seemed to prefer more reliable, sturdy or cheaper weapons (like a lead pipe). But preying on prejudices and ignoring common sense is popular in the Golden State, so California outlawed them. Which has done a great job of keeping these toys out of collectors hands, but serious criminals have access to smuggling distribution channels for drugs, so these tools are readily available to thugs that want them. Thus the regulation was great at making more criminals, but has done nothing to help with stabbings and crimes.

Some knives can be opened with the help of gravity (you point them downward, push a button and they fall out). They should actually be called momentum knives, since most are intended to be flicked out (using momentum). These were made illegal because they were too easy to open. One type of gravity knife that was considered especially dangerous was the butterfly knife. A butterfly knife has a hinged handle, and if you know how to work it, you can be flashy and open in with one hand with a complex series of wrist flick, and have it opne in a large fraction of a second (with twirls and clicks). ohhh, scary.

Somewhere I have an old Butterfly Knife that I bought before the law really kicked in, and since I can't find it to throw it away, I'm guilty of a misdemeanor or felony. Don't you feel safer knowing that your neighbors could waste thousands of dollars on defense, or spend time in prison for having a pointy stick?

Of course I did manage to slice myself a few times while learning how to twirl, flip and throw and catch (as well as snap it open/closed) in flashy ways that no true criminal or thug would really care about. It was actually quite a skill to practice and learn and fun/hard to do well. We must stop that, who knows where that freedom might lead!

In the real world, many legal pocket knives have a little thumb post on the blade that you can flick to open with one hand in less time and with a lot less skill than it takes to operate a butterfly knife. Making them the are far more reliable (and used) weapons for muggers and fisherman. But as usual the laws aren't about intelligence, reason, usage or anything that makes sense, they are about what some legislator put on paper and got the gullible to pass. And in California they have a lot of gullible. The obvious solution to lock-blade knife usage is to outlaw adding small posts to all pocket knives.

Another brilliant law is Shuriken/Shaken laws (like in California). A shuriken is a multi-pointed throwing knife (like a Ninja weapon) and shakens are usually other forms of throwing knives (darts, spikes and so on). These things were considered much too dangerous -- I think the legislators watched one too many Hollywood Ninja movies or TV show, and decided to save us from the spate of ninja crimes that weren't happening. So in California, if you own any multi-pointed / bladed disk that could be thrown at someone, then you are guilty of a felony (at least a misdemeanor). Notice OWNING is the crime -- you don't have to use it, threaten some one, or endanger anyone (which are real crimes), you are guilty just for having it. The law is so vague that you are technically guilty of a felony for owning a circular saw blade (if it is not actually mounted to a saw) -- and more than a few people have even been prosecuted for it.

Now the irony of the Shuriken laws is that long after the law was passed, some gang members actually did start carrying and throwing circular saw blades at one another. (Which has lead to circular saw-blade arrests). But before you think the law did any good, you have to remember they were already guilty of many bigger crimes such as aggravated assault. Thus, the only thing the law has done, is punish innocent collectors and martial artists.

I had some shurikens at one time (also long lost/misplaced). And I used to make them as a teen, from horseshoe nails, exacto-knife blades, and a welder. Or from stock steel that I later sharpened. By passing this law, they're saying all kids that did this (and I knew quite a few) belong in prison, or they deserve heavy fines for playing with things that are pointy?

Learning to throw stars (and knives) was not an easy skill, but I practiced a lot. I'm probably in the top .1% of people in the world that can throw knives/shurikens (mostly because most of the world doesn't practice with them). But I can tell you, their value as a real weapon is greatly overrated. I could hit all sorts of targets, but they just don't have the weight/mass to penetrate very deep. A skilled shuriken thrower couldn't kill a passed out vagrant at 10' with one (and their value diminishes after that) -- though they could give him a nasty gash. Throwing knives are a little more effective at that range (better penetration), but not much -- and bleeding to death is slow from a stab wound. And I don't know about you, but I don't want to hand over my knife, to some very pissed off person, in a combat situation. (Even if they caught it by the pointy end). They're probably going to gut you in a rage before they die. The only thing throwing a knife/shuriken is useful for, is distracting someone for a split second before you shoot them or club them to death.

So contrary to Hollywood (and progressive paranoia), you'll be much better off with some retard, with decades of shuriken training, trying to throw ninja stars at you, than some pissed off biker coming at you with a tire iron (and the motivation to use it). So this was another case of legislators watching too many spy movies.

It doesn't stop there. So are swords, butterfly knives (short swords), scythes, and almost anything sharp is a crime. And not to stop there, of course sticks (baseball bats, batons, staffs, sectioned staffs, clubs, etc) are also crimes to own as well. Each time one of these laws is passed it doesn't do one thing to change a criminals behavior (most don't even know they're illegal), and the cops don't have time or motivation to enforce it. So the only thing these laws can do, is waste time, money and teach people contempt for the law (and legislators)

Now I once got caught with an extendible baton (which is against the law), fortunately, the cop had a sense of humor, and I talked my way out wasting time in jail. But the problem is creating laws that aren't enforced is worse than nothing -- it empowers corruption and abuse. And if I was committing a real crime (threatening or beating someone with one), then I can already go to prison for that. So the law did nothing.

There is a joke in programming that the most dangerous thing in your building is a manager with technical magazine, because once armed with that, they think they have a clue and are going to help you. Well that applies to legislators with a TV set -- especially progressive ones in California.

What we know is that even if prohibition made sense (which they almost never do), they're still ineffective. Criminals don't obey laws, so all you do is make more criminals.

A law is the point where a behavior (or tool) is so dangerous that, "you should be imprisoned, killed or have your property taken if you violate the rules regulating them". And if the intent isn't the problem but the tool is, then you need to regulate the tools. But use common sense, is this really what you want to lock people away for? All these bad laws aren't making the world a better place -- they turn otherwise ordinary law abiding citizens (collectors, practitioners) into criminals, and are the seeds of corruption and abuse (selective enforcement).

So instead of power police and district attorneys, with absurd prosecutorial discretion, and turning mild mannered people into criminals, and clogging our courts and jails with useless make-word felons like the collector that dared to buy that ancient ninja toy, or a WWII Parachuters gravity knife, let's let them focus on the important stuff: murder, rape, assault and property crime -- and remember the most important thing about making new laws. Each new law we make, dilutes the rest.